Here is an initial list of the 2010 US new approved drugs (specifically New Molecular Entities). The way we count things, there were 19 novel newly approved drug substantces in the US last year. 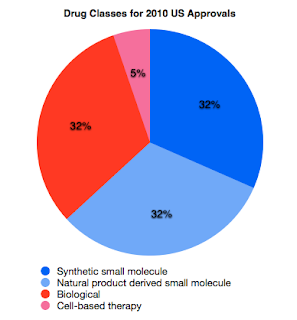 For details on the icon set used in the table, see this link.

Following some checking, I've added Dienogest to the list (it is part of the combination product Natazia), and updated the analysis below... Some sources are stating that there are 21 'New Drugs' for 2010; however, a 'new drug' is not necessarily the same as an NME, and also there are some inconsistencies on the FDA approval tables for 2010 at the current time (for NMEs that everolimus (Zortress) was first approved in the US in 2010, it was actually first approved in 2009 as Affinitor), that make counting the NMEs for the year problematic. the raw approval data from the FDA is in a series of monthly charts, accessible here (unfortunately, there is no easy, web-friendly way to provide a set of useful links, you'll just have to type in the months). In these tables you should look for the 1s, as being the new NMEs, as you will see, quite a few are unassigned, and as mentioned above there are some errors (e.g. everolimus was first approved (as a new NME) last year, however, under a different Tradename, for a different indication).

Another interesting case for a new 2010 biological drug is Collagenase Clostridium histolyticum (approved in the US in 2010 as Xiaflex), which is a defined composition mixture of two bacterial collagenase gene products. Xiaflex is dosed parenterally. In 2004 Santyl was approved as a topical drug for wound debridement; the active ingredient in Santyl is ‘Collagenase clostridium histolyticum’, produced by an entirely different process. It would appear from cursory literature analysis that Santyl has non-articulated composition (this is not the same as having a variable or non-specific composition, just that the components are not in a defined composition in the easily accessible public regulatory documents). There are clear developmental and safety differences between a topically dosed ‘local’ agent (Santyl), and an agent that has full exposure to the circulatory and immune system (Xiaflex), and they serve different patient populations, have different indications, etc. They are clearly non-substitutable in a clinical setting.

So, how does one treat this case? Should Xiaflex be considered as actually two new NMEs (the independent and related products of the related ColG and ColH gene products, which is actually what the USAN references) towards drug approval innovation numbers, or should it be subsumed under the previous approval of Collagenase Clostridium histolyticum for Santyl. We have taken the view, from the perspective of the approval of ‘new NMEs’, that Xiaflex contains a previously approved active ingredient. Others will take different views.

More broadly, it is of interest to examine the USAN definition for Xiaflex - it contains two distinct chemical components (the two sequence related collagenase proteins) in a simple mixture - there is nothing special about the mixture - for example, they are not a defined composition obligate heterodimer, and they will be separable from drug substance via straightforward routes under native physiological-like conditions. Some small molecule USANs contain multiple molecules, but these are invariably salts, and in cases where there are two (or more) active ingredients in a small molecule drug, they are typically assigned separate USANs. Furthermore, the convention now is to assign a USAN for the parent small molecule, as well as for each distinct salt, even if the salt is the only component in an approved product. This is in-line with the INN model (where salts are not usually assigned distinct INNs) Logically, to us, from an informatics perspective, it would make sense to assign USANs for Xiaflex at the level of the distinct proteins), and then for Xiaflex to be a ‘product’ containing two USANs as a defined mixture, in the same way the many small molecule mixture drugs are defined. Anyway, the informatics representation of biological drugs, and the concepts of bioequivalence, differences in post-translational processing (proteolytic maturation, N- and O-linked glycosylation, etc) may seem to be a semantic discussion, but it does have important commercial and healthcare implications. This issue will no doubt keep many drug discoverers, regulators, and intellectual property staff employed for some time, and hopefully will eventually bring improved, cheaper and continually innovative healthcare to all.

Stepping back even further… Given that current drug naming processes and ‘business rules’ were developed at a time when the complexities of biological drugs were not imagined, and also before a time of electronic databases, and the benefits of the application of controlled vocabularies, dictionaries and ontologies were really appreciated - it is interesting to reflect on how it would be done nowadays if starting from scratch. More of this in a future post (maybe).

In final summary, the number of molecularly novel drugs that were approved in the US last year is between 19 and 22, with the difference being in the way that biological drugs are treated!
Posted by Unknown at 12/24/2010 09:13:00 am No comments: Links to this post

A local meeting for local people 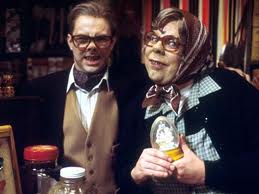 Andreas Bender from the Unilever Center in Cambridge has set up a series of meetings for networking of molecular modellers, chemoinformaticians and allied trades  for the Cambridge, UK, area. The meetings alternate between the University in Cambridge and the EBI, these have been great fun so far, and there is now a web-site for the Cambridge Cheminformatic Network, with a Doodle Poll for dates for the 2011 meetings.
Posted by Unknown at 12/21/2010 03:25:00 pm No comments: Links to this post

Today, RCUK and The UK research councils announced the budgets and priorities for UK science spending for 2011-2015. A link to the BBSRC delivery plan is here.
Posted by Unknown at 12/20/2010 10:56:00 am No comments: Links to this post

Links to ChEMBL data from Wikipedia

Everyone's favorite free encyclopedia - wikipedia, has started to get links to ChEMBL added. The links are all sorted out, now we just need a bot to go round and sort everything out for a large set of compounds. So, to give you some idea of how it will look, here are some links to some classics

ChEMBL（ケンブル) is now on Japanese Wikipedia. 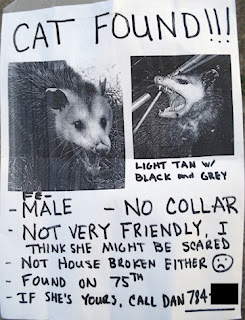 Registration for the 2011 residential ChEMBL Training course, running from the 14th to the 18th of Feburary 2011, is now underway, further details can be found at this link. 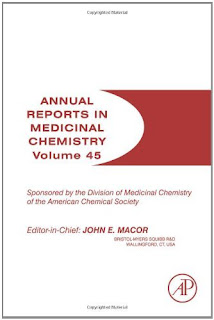 One of the highlights of the year for me is the gentle thud of ARMC (Annual Reviews in Medicinal Chemistry) landing in my pigeon hole at work. This book alone, I consider, justifies my ACS membership dues. Volume 45 is edited by John Macor, and has some excellent chapters, highlights for me were the TLR review, the epigenetic targets, the neglected tropical diseases and the drug attrition chapters. Lots and lots to keep you occupied on your commute (unless you drive).

A conference goers bag of drugs? 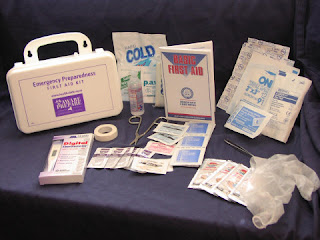 I was musing on the drugs I need to take with me while travelling. Here is the first go at a list. This trip, I packed only one item.....


Of course, you should use common sense and judgement in such matters, and also take the advice of your personal doctor or physician ;)
Posted by Unknown at 12/06/2010 11:15:00 pm No comments: Links to this post 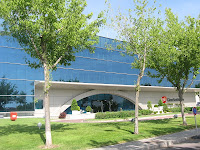 Here is an update on some follow-on chemistry on the GSK Malaria screening set, provided by the researchers at GSK's Tres Cantos Medicines Development Campus.

We'll put this data into the ChEMBL-NTD microsite shortly, but if any other groups have updates on the Malaria screening data disclosures, or various analyses that we could point to, we'd be very happy to hear.

If you want to link directly to a particular TCMDC number you can use a url of the form...