A number of you have asked for further details on the malaria postdoc project.... (details on how to apply, deadlines, etc can be found here).

Malaria remains one of the most significant causes of developing world mortality, and this global burden coupled with recent reports of parasites resistant to artemesinin, the most recently released anti-malarial, makes the search for new therapeutics an urgent priority. While the availability of multiple Plasmodium genome sequences has the potential to make a significant impact on malaria drug development, almost all previously successful therapies were empirically discovered and developed, and without a defined molecular target. Such entirely empirical-based discovery is now not considered practical, and so a hybrid approach of cell-based screening followed by target discovery for bioactive hit series is a compelling and practical way forward. Recently a number of very significant disclosures of HTS cell-based screening studies have occurred (see http://www.ebi.ac.uk/chemblntd). These data also typically have i) secondary assays to establish estimates of IC50 values, ii) cytotoxicity values against a human cell-line, and iii) a measure of compound ‘promiscuity’ (the propensity of a compound to be active in large number of assays, sometimes known as ‘frequent hitters’). Given that the compounds are cidal, and cell-penetrant, these datasets are highly valuable for future target and lead discovery for novel malaria therapies.

However, for these data, the precise molecular targets and mechanism of action are currently unknown, and a major challenge is in the identification of a target/mechanism of action for each compound/compound class. Once a specific target is known, it greatly simplifies future validation and compound optimisation, and also provides key insights into disease biology, pathogenesis, therapeutic index (TI), likelihood of resistance, and so forth.

The available postdoc position is multidisciplinary and highly collaborative and links computer-based target prediction and analysis along with experimental validation in order to identify potentially novel targets for the development of new and innovative anti-malarial therapies. The position will fund a postdoctoral position working jointly between two newly established groups, one (Overington, EMBL-EBI) with an expertise in chemoinformatics, drug discovery and lead optimisation, and the second (Rayner, Sanger) with expertise in malaria disease biology, genomics, experimental genetic manipulation and target discovery. Given the broad range of techniques required, we will provide training in any required areas.

The work will train a researcher in the principles of drug discovery as well as advanced molecular biology and genetic manipulation techniques in Plasmodium parasites, and will therefore give them a wide-ranging set of skills in the key future area of Chemical Biology.


The planned work programme is as follows:

We have just published a brief editorial in Open Chemical Data entitled 'Role of open chemical data in aiding drug discovery and design' in the journal Future Medicinal Chemistry, the good news is that the article is free, and downloadable here 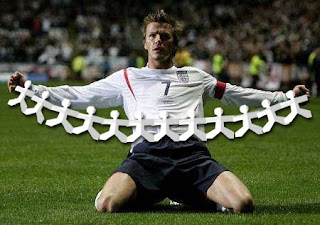 There is an opportunity to apply for a Postdoc. position under the joint supervision of John P. Overington (EMBL-EBI) and Julian Rayner (Sanger Centre). The project will use the recently published and publicly released HTS Malaria datasets, and attempt to predict and validate target assignments using a variety of computational and experimental approaches. The position would ideally suit an ambitious and skilled researcher interested in chemical and molecular biology.


The deadline for applications is 15th August 2010. Further details and the application process can be found here and here.


I'd be happy to clarify anything about the project, just mail me.

We have released and update to the ChEMBLdb Interface, the most significant of all the changes is the inclusion of the Highcharts javascript charting library. If you are not familiar with this library have a look at the demo page to get an idea of its capabilities. In the ChEMBLdb interface we used the library to update the Target Browser page and introduced a scatter plot view for compound result sets.

The new target browser can seen below: 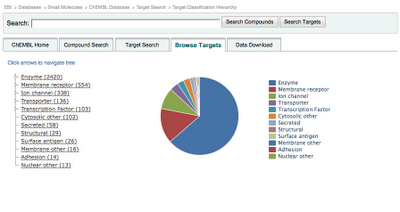 For compound searches returning less than 1000 compounds users can switch from a tabular view to a chart view: 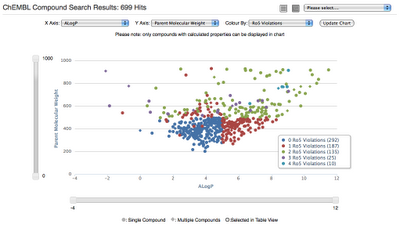 Chart features include: The axis sliders can be used to filter an initial compound result set. The filtered data set can then be downloaded, filtered further, switched to the tabular view or reset.

We hope you like this addition to the interface and expect to see more Highcharts data visualisations soon.
Posted by Mark Davies at 6/11/2010 11:05:00 am No comments: Links to this post

Email ThisBlogThis!Share to TwitterShare to FacebookShare to Pinterest
Labels: Interfaces 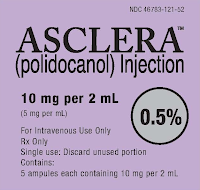 ATC code: C05BB02
On March 30th, the FDA approved Polidocanol under the trade name Asclera. Polidocanol is a sclerosing agent indicated to treat uncomplicated spider veins (varicose veins ≤1 mm in diameter) and uncomplicated reticular veins (varicose veins 1 to 3 mm in diameter) in the lower extremities. Varicose veins develop when the small valves inside the veins no longer work properly, allowing the blood to flow backwards and then pool in the vein.
When injected intravenously, Polidocanol works by locally damaging the endothelium of the blood vessel, causing platelets to aggregate at the site of damage and attach to the venous wall. Eventually, a dense network of platelets, cellular debris and fibrin occludes the vessel, which is then replaced with connective fibrous tissue. As one would expect for this type of molecule and also the mechanism of action, there is believed to be no specific molecular target for Polidocanol.
Polidocanol is a large 'small molecule' drug (Molecular Weight of 583 g.mol-1), with a mean half-life of 1.5 hr. Polidocanol is administrated intravenously and the strength of the solution and the volume injected depend on the size and extent of the varicose veins. Thus, the recommended dosage is 0.1 to 0.3 mL for each injection (Asclera 0.5% for spider veins and Asclera 1% for reticular veins) into each varicose vein, and a maximum recommended volume per treatment session of 10 mL. 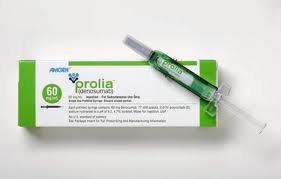 ATC code: M05BX04
On June 2nd, the FDA approved Denosumab (previously known as AMG-162), a human monoclonal antibody against RANK-ligand, for the treatment of postmenopausal osteoporosis (PMO). The ATCC code is M05BX04

Osteoporosis is characterized by reduced bone mineral density and a degradation of the small-scale bone structure, leading to increased risk of bone fracture. Osteoporosis is a common disease, affecting primarily women aged 50 and above and are at high risk of fracturing their lumbar vertebrae, hips, wrists and ribs. Osteoporosis is estimated to cause 2 million fractures annually in the US.

Bones undergo constant remodeling that can be understood as a process of simultaneous deconstruction of bone material by osteoclasts (these are big, mobile cells which derive from a common lineage with macrophages) and formation of mineral bone by osteoblasts. Both processes are in a dynamic equilibrium, and this equilibrium keeps the bone mineral density at a stable level. Reduced levels of estrogen, as encountered in women after entering the menopause, increase the number of osteoclasts and promote their activity of resorbing mineral bone. The resulting loss of mineral bone eventually causes osteoporosis.

The bone remodeling equilibrium is regulated by a network of cytokine signalling molecules in which the RANK-ligand (RANKL, O14788) molecule plays a key role, mediating osteoclast activation through binding of the membrane protein receptor activator of nuclear Factor κB (RANK, Q9Y6Q6).  RANKL is a member of the tumor necrosis factor (TNF) family of proteins.

Denosumab exerts its effect through binding to RANKL, and is functionally similar to an endogenous protein, osteoprotegerin, a membrane protein that binds RANKL but does not promote any activating effect.

Denosumab is administered as a subcutaneous (s.c.) injection of 60mg once every 6 months. The half-life of Denosumab in blood serum is 24.5 days. Side effects of Denosumab usage are listed as hypocalcemia, serious infections of the skin, abdomen, urinary tract and ear, dermatologic adverse reactions and osteonecrosis of the jaw.

Denusomab is marketed by Amgen under the name Prolia. The full prescribing information can be found here.
Posted by felix at 6/09/2010 11:16:00 am No comments: Links to this post

We have uploaded 2 torrent files on to the BioTorrents website, one contains the chembl_04 flat files the other the chembl_04 mysql database. You can access the files here.

Thanks to Morgan Langille for setting up the service and answering a number of questions I had during upload process.
Posted by Mark Davies at 6/08/2010 05:01:00 pm No comments: Links to this post 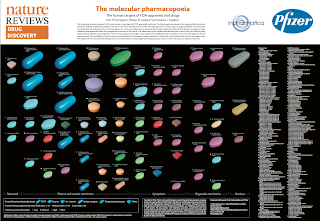 We have a number of posters available associated with the NRDD review 'How many drug targets are there?" available; if you would like one or two of these, please mail us
Posted by Unknown at 6/07/2010 10:07:00 am No comments: Links to this post