One of our bff's are the guys and gals at the SGC in Oxford, they have recently got a grant to establish a University-wide Chemical Biology Platform, and are now looking for a Project Manager for this effort.

The diXa project is looking to recruit a someone to provide part-time maternity cover for the Scientific Training & Dissemination Officer in the Industry Support team which is based at the European Bioinformatics Institute (EMBL-EBI) located in Hinxton, near Cambridge in the UK.

The diXa project is dedicated to developing and implementing a robust and sustainable service infrastructure for data from EU-funded research into non-animal tests for predicting chemical safety (http://www.diXa-fp7.eu/). EMBL-EBI is a partner in the diXa project with a number of responsibilities.

The overall objectives for the position will be to deliver a core set of project-related training and dissemination services to the Toxicogenomics Research Community and to help foster effective use of resources provided through the project working with colleagues at EMBL-EBI and the other partner sites. The successful candidate will also liaise with other groups involved in training and dissemination both at EMBL-EBI and at other training partner sites. Training activities will have a strong industry focus but will also include other stakeholders.

The key responsibilities for the position and the desired qualifications and experience of the applicant can be reviewed on the diXa project website.
http://www.dixa-fp7.eu/news/dixa-vacancy

Non small cell lung cancer (NCLS) (CRUK NCLS; PDQ NCLS) accounts for 78% of lung cancer incidences in the UK and is typically resistant to chemotherapy. In clinical studies, afatinib increased the mean Progression Free Survival to 11.1 months from 6.9 months (compared to standard of care Pemetrexed/Cisplatin). Furthermore, response to treatment was observed in tumors harboring several EGFR mutant species although the duration of response varied from 6.9 months to 16.5 months depending on the mutation . 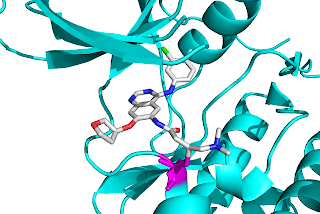 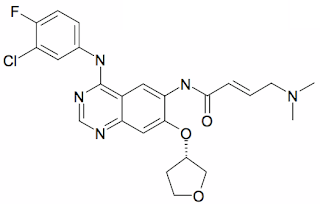 GilotrifTM is produced by Boehringer-Ingelheim

The USANs for July 2013 have recently been published.