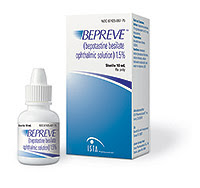 We're mopping up a few drug approvals from 2009 we have not yet covered yet as monographs... Approved on September 8th 2009 was Bepotastine Besilate, marketed under the trade name Bepreve. Bepotastine is a topical, selective and non-sedating histamine (H1) receptor antagonist indicated in the treatment of itching associated with allergic conjunctivitis. Through the H1 binding, Bepotastine has broad range of anti-inflammatory effects - a stabilizing effect on mast cells, inhibition of eosinophil migration and interleukin-5 (IL-5), leukotriene B4 (LTB4) and platelet activating factor (PAF) release. Bepotastine has been previously approved in Japan, under the trade name Talion, for allergic rhinitis (2000) and urticaria and skin pruritus (2002). Bepotastine is a chirally pure, synthetic small molecule drug (Molecular Weight 388.89 g.mol-1 for Bepotastine itself and 547.06 g.mol-1 for the dosed besilate salt), is Rule-of-Five compliant and is delivered as an ophthalmic solution. Bepotastine has a low protein binding of approximately 55%, is minimally metabolized by CYP450 isozymes and elimination is mainly through renal excretion (approximately 75-90% excreted unchanged in urine). The recommended dosage is one drop directly to the infected eye(s) twice a day. The prescribing information can be found here. 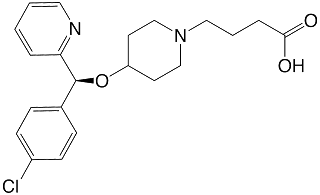 The structure (+)-4-[[(S)-p-chloro-alpha-2-pyridylbenzyl]oxy]-1-piperidine butyric acid, with no unusual reactive features. There is a single stereocenter in the structure, and Bepotastine is dosed as the (+) enantiomer. The physicochemistry will be dominated by the Zwitterionic nature of the molecule - a molecule of nett neutral charge, but which contains compensatory charge centers - in this case the basic nitrogen of the central piperidine ring, and the carboxylic acid (on the far right of the compound figure). Bepreve is marketed by IstaVision and the product website is here