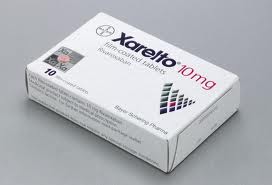 On July 1st, FDA approved Rivaroxaban (trade name: Xarelto, Research code: BA-59-7939, NDA 022406), an anti-coagulant to prevent deep vein thrombosis (DVT) in patients with knee or hip replacement surgery. Rivaroxaban is the first orally applied direct inhibitor of Factor Xa (FXa), a key regulatory of the coagulation cascade. In DVT, a blood clot is formed which can dislodge and travel to the lungs, causing pulmonary embolism which can be potentially fatal.


Factor X itself is synthesized as an inactive precursor, and is further processed into a mature form, consisting of a light and an "activated" heavy chain (=FXa, residues 235-488, bold in the above sequence, carrying a trypsin-like domain, Pfam PF00089) (green and red in the below picture, respectively). There is a plethora of experimentally solved structures available for FXa, and also a holostructure of FXa in complex with Rivaroxaban, PDBe:2w26. 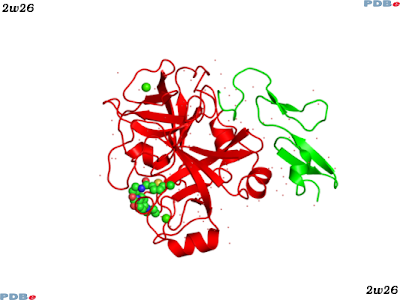 Xarelto is administered orally as a 10 mg tablet once daily for 12 or 35 days (after knee/hip replacement surgery, respectively), yielding ~23 umol of active substance per single dose. Most relevant risks connected to Xarelto treatment are serious and fatal bleeding.

It has been given a boxed warning for spinal/epidural hematoma in surgical settings. It has not been tested in pregnant women, nursing mothers, or pediatric settings; majority of participants in clinical trials were 65 years and over, and the efficacy of Xarelto in the elderly was found to be similar to that seen in younger patients. The effect of Xarelto lasts 8-12 hours, but FXa activity stays depleted during 24 hours, so a once-daily dose is sufficient.

It has high (80-100%) bioactivity and is rapidly absorbed, reaching Cmax at 2 to 4 hours. Its volume is distribution is Vss=50 L. Little metabolism is observed for rivaroxaban, with the majority of the dose excreted unchanged.

Xarelto has been developed by Bayer Schering AG. In US, it will be marketed by Janssen Pharmaceuticals, Inc.

The product website can be found here, the full prescribing information, here.