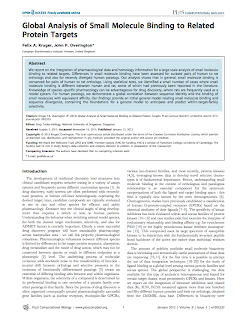 Many drugs are small molecules that specifically bind to proteins involved in disease related processes. In this way, drugs modulate the function of a targeted protein and ultimately the process causing the disease. The development of drugs crucially relies on assays that measure the potency of the effect a small molecule exerts on its protein target. We compared the potencies of small molecules measured for human proteins and the corresponding (orthologous) protein in rat. Our results suggest that, after subtraction of statistical noise, most human proteins show equivalent potency for small molecule binding as their orthologs in rats. However, we identified a small number of exceptions to this rule, for example the histamine H3 receptor, a protein of the central nervous system. We also compared the potency of small molecules measured against a human protein and another member of the same protein family. In drug development it is often desired to target a protein selectively over other related proteins. The observed differences were generally greater than the statistical noise, indicating that most of the small molecules in our study have some degree of selectivity within protein families.

Link to the paper is here.