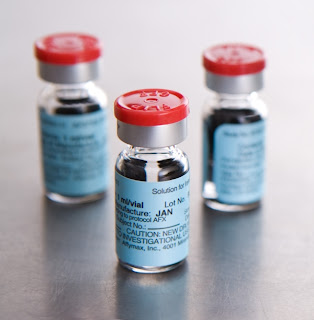 ATC code: B03XA (incomplete)
On March 27, the FDA approved Peginesatide for the treatment of anemia due to chronic kindney disease (CDK) in patients on dialysis. CDK is a slow but progressive loss of kidney function that can be caused by diabetes mellitus,  hypertension and glomerulonephritis, among others. One of the symptoms in the advanced stages of CDK is anemia, a decrease in the number of red blood cells and hence the hemoglobin (adult hemoglobin: heterotetramer of two copies of P69905 and two copies of P68871) content of the blood. Anemia in patients suffering from CDK is caused by reduced production of erythropoetin, a hormone that regulates the levels of red blood cells and is synthesized predominantly in the cortex of the kidney.

Anemia induced by CDK can be treated by supplying exogenous erythroepotin or analogs of this hormone (e.g. Methoxy polyethylene glycol-epoetin beta, CHEMBL1201829). The collective term for these substances is erythropoiesis-stimulating agent (ESAs). Like endogenous erythropoetin, ESAs exert their effect through binding of the erythropeotin receptor (EpoR, Uniprot P19235) and subsequent activation of the JAK2 (Uniprot O60674) STAT5A (Uniprot P42229) pathway, which results in increased survival of erythrocyte progenitors.

Peginesatide is an ESA with no sequence homology to erythropoetin. Instead, it is composed of two synthetic 21 amino-acid peptides that are linked through a lysine branched PEG chain, as shown below.

Peginesatide does not induce any cytochrome P450s and according to in-vitro protein-binding studies does not bind serum albumin or lipoproteins. The half-life of Peginesatide following intravenous administration is 25.0 ± 7.6 hours in healthy subjects and 47.9 ± 16.5 hours in dialysis patients. Clearance is 0.5 ± 0.2 mL/hr.kg and the mean volume of distribution is 34.9 ± 13.8 mL/kg. Peginesatide is mainly cleared through the urine and a study using radio-labelled Peginesatide indicates that it is not excreted unchanged.

An advantage of Peginesatide over other ESAs is that it can be administered at monthly intervals. Given the adverse reactions, the dosage recommendation is to individualize dosing and give the lowest dose that is sufficient to reduce the need for blood transfusions. 0.04 mg/kg is the recommended dose for probing patient response.

Peginesatide was developed by Affymax and Tekeda Pharmaceuticals and is marketed under the trade name Omontys.