On September 12th the FDA approved Teriflunomide (tradename AUBAGIO, ChEMBL973), an orally administered drug for the treatment of relapsing forms of Multiple Sclerosis (MS). Teriflunomide is an inhibitor of of pyrimidine synthesis by dihydroorotate dehydrogenase (DHODH, Uniprot: Q02127) but is it not certain if this explains the effect of the drug on MS lesions. Teriflunomide inhibits rapidly dividing cells, which includes activated T lymphocytes thought to drive the MS disease process. The net effect of the inhibition of DHODH is that lymphocytes cannot accumulate sufficient pyrimidines for DNA synthesis. Additionally, Teriflunomide has been shown to inhibit the activation of nuclear factor kappaB and tyrosine kinases, but at doses higher than needed for the observed anti-inflammatory effects. Teriflunomide is the active metabolite of an already approved drug Leflunomide (tradename Arava, ChEMBL960) indicated for the treatment of rheumatoid and psoriatic arthritis.

MS is an inflammatory disease characterised by damaging of the myelin sheaths surrounding the axons of the brain and spinal cord. This demyelation results in a broad number of symptoms scarring. The prevalence ranges between 2 – 150 per 100.000 and the disease onset usually occurs in young adults. MS cannot currently be cured and the prognosis is difficult to predict, depending on the subtype of the disease. The United States National Multiple Sclerosis Society characterised four clinical courses, two of which are classified as relapsing forms of MS namely 'relapsing remitting' and 'progressive relapsing'. 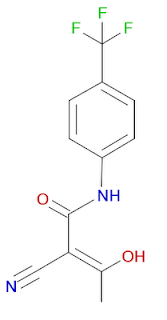 The structure of the drug can interconvert between Z and E stereoisomers with the Z enol being the most stable and the active form.

The recommended dose of AUBAGIO is 7 mg or 14 mg orally once daily. AUBAGIO can be taken with or without food.

Teriflunomide is mainly eliminated through direct biliary excretion of unchanged drug and renal excretion of metabolites.

The drug comes with a box warning to alert prescribers to the risk of liver problems, including death, and a risk of birth defects. Physicians are advised to do a blood test for liver function prior to prescribing Terfiflunomide and periodically during the course of treatment. Based on animal studies, the drug may cause fetal harm.

The license holder is the Genzyme Corporation and the full prescribing information can be found here.