On the 31st July 2009 Saxagliptin (tradename Onglyza) was approved for the treatment of Type II diabetes - Type 2 Diabetes is also known as adult-onset diabetes, and also non-insulin-dependent diabetes melittus (NIDDM). It is the type of diabetes that is often associated with obesity, and so is an increasingly common disease/condition in our well-fed western and also developing world cultures.

Saxagliptin (previously known by the research code BMS-477118) is the third orally-dosed Dipeptidyl peptidase-IV (or DPP-IV) inhibitor to market, and is in the same mechanistic class as other 'gliptins' - Sitagliptin (tradename Januvia) and Vildagliptin (tradename Galvus/Eucreas) which are both launched and also others such as Alogliptin (aka SYR322) and Linagliptin (aka BI-1356, and expected tradename Ondero), which are in late stage clinical trials. The DPP-IV drug class has had quite a complex development and commercial history, as web searches will readily show. 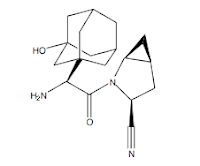 The Saxagliptin structure is (1S,3S,5S)-2-[(2S)-2-Amino-2-(3-hydroxytricyclo[3.3.1.13,7]dec-1-yl)acetyl]-2-azabicyclo[3.1.0]hexane-3-carbonitrile. It contains a number of interesting chemical groups, and a clear underlying similarity to a dipeptide can be seen in the 2-D structure (the enzyme DPP-IV, a proteinase, cleaves the two N-terminal amino acids of its substrate peptides)). Normally DPP-IV is involved in the inactivation of two endogenous peptides, GLP-1 and GIP, by DPP-4, blocking this degradation potentiates the secretion of insulin in the beta cells and suppress glucagon release by the alpha cells of the islets of Langerhans located in the pancreas. The first functional group of note is the nitrile (the triple bonded nitrogen-carbon unit) - this is essential to the inhibitory activity and is found in several of the other 'gliptins. This group forms a reversible, covalent bond with the residue Ser 630 of DPP-IV. Secondly, there is the bulky, hydrophobic adamantane (or (tricyclo[3.3.1.13,7]decane) group (this is the 3-D cage like portion of the molecule. Simple substituted adamantanes are sometimes drugs in their own right, for example amantadine, memantine and rimantadine. Within the 'gliptins though, the large bulky adamantyl group blocks an intramolecular cyclisation, which inactivates the inhibitor. These nitrile and adamantyl groups are linked via an amide bond, and an unusual 5,3 fused ring system pyrollidine (which resembles the amino-acid proline, found in the corresponding position of natural substrates).

The license holder for Saxagliptin is Bristol Myers Squibb and the product website is www.onglyza.com.

Mapping lists of IDs in ChEMBL

By David Mendez February 17, 2021
In order to facilitate the mapping of identifiers in ChEMBL, we have developed a new type of search in the ChEMBL Interface. Now, it is possible to enter a list of ChEMBL IDs and see a list of the corresponding entities. Here is an example: 1. Open the ChEMBL Interface , on the main search bar, click on 'Advanced Search': 2. Click on the 'Search by IDs' tab: 3. Select the source entity of the IDs and the destination entity that you want to map to: 4. Enter the identifiers, you can either paste them, or select a file to upload. When you paste IDs, by default it tries to detect the separator. You can also select from a list of separators to force a specific one: Alternatively, you can upload a file, the file can be compressed in GZIP and ZIP formats, this makes the transfer of the file to the ChEMBL servers faster. Examples of the files that can be uploaded to the search by IDs can be found  here . 5. Click on the search button: 6. You will be redirected to a search resul
Post a Comment
Read more