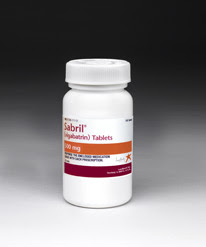 The next approval for this year, on August 21st, was Vigabatrin (trade name Sabril). Vigabatrin (previously known by the research code MDL-71,754) is an antiepileptic drug indicated as a monotherapy for pedriatic patients 1 month to 2 years of age with infantile spasms (IS) and as an adjunctive therapy for adult patients with refractory complex partial seizures (CPS) who have inadequately responded to several alternative treatments. Vigabatrin has previously been approved in the UK, Mexican, Canadian and Danish markets. Vigabatrin is the first therapy approved for the treatment of IS and a new option as add-on therapy for the adults with CPS. Vigabatrin is an irreversible inhibitor of gamma-aminobutyric acid transaminase (GABA-T), the enzyme responsible for the metabolism of the inhibitory neurotransmitter GABA; blockade of GABA-T leads to increased levels of GABA in the central nervous system. This enzyme can also be irreversible inhibited by Gabaculine, a naturally occurring bacterial neurotoxin that acts its activity by covalently binding to activated Vitamin B6 (pyridoxal phosphate), the essential cofactor for GABA-T activity. However, as a result of only binding to the cofactor, the inhibitory action of Gabaculine can be overcome by increasing vitamin B6 intake. Acting in a similar but extended manner, Vigabatrin covalently binds to both GABA-T as well as vitamin B6.

Vigabatrin is a 'small' small-molecule drug (Molecular Weight of only 129.16 g.mol-1), is freely soluble in water, and is closely similar to the natural GABA-T substrate, GABA. Vigabatrin is essentially completely orally absorbed, is widely distributed throughout the body, with a volume of distribution of 1.1 L/Kg, and shows negligible plasma protein binding. Vigabatrin is not significantly metabolized (80% of a dose is recovered as parent drug), although it does induce (upregulate expression) of CYP2C9, and it is eliminated primarily through renal excretion. It has a half-life of 7.5 hours.

Vigabatrin has a boxed warning. 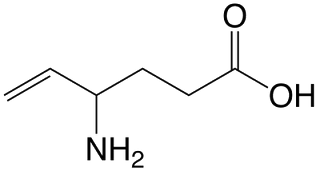 The structure is (±)-4-amino-5-hexenoic acid. It is a GABA analogue and is dosed as a racemic compound, with the S-enantiomer being the pharmcologically active form. The first and most notable chemical feature is the alkene group (the double bonded C-C unit), which forms a irreversible, covalent bond with the enzyme and is therefore essential for its inhibitory activity. Generally, drugs that act via formation of covalent bonds, and especially those that form irreversible covalent bonds, are traditionally viewed unfavourably by medicinal chemists, for two major reasons - firstly, the potential for non-specific interactions and side-effects, and secondly, the potential to the drug-protein complex to be recognised by the immune system and trigger a toxic immune response. However, this trend is surprisingly weak, with several blockbuster drugs having irreversible mechanisms - e.g. Esomeprazole and Clopidogrel. Also important for the activity of Vigabatrin is the primary amine group, which undergoes initial nucleophilic addition to the aldehyde group of Vitamin B6 cofactor, binding covalently to it.

The license holder is Lundbeck Inc. and this is the product website.