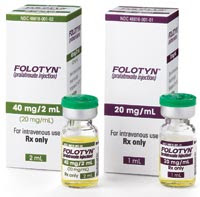 Also approved on September 25th was Pralatrexate (tradename Folotyn). Pralatrexate is the first drug approved for the treatment of Peripheral T-Cell Lymphoma (PTCL), an aggressive form of non-Hodgkins lymphoma. Lymphoma is a cancer that begins in the lymphocytes of the immune system. PTCL is a rare disease, occurring in around 9,500 patients each year in the United States.
Pralatrexate, also known as PDX, is a folic analog that competitively inhibits dihydrofolate reductase (DHFR). Since Pralatrexate blocks the use/function of a metabolite, it is also an antimetabolite. Pralatraxate has high affinity for the folate transporter SLC19A1 (also known as RFC-1), and so is an example of a drug that is 'actively transported', and is also a substrate for polyglutamation by the enzyme folylpolyglutamate synthase (FPGS). Once polyglutamated Pralatrexate has a prolonged intracellular half-life, giving prolonged action in malignant cells. Pralatrexate is related to several other drugs, most notably Methotrexate, and 'old' launched drug, and also the clinical stage compounds - Ketotrexate, Edatrexate, and also the antiprotozoal agent Trimetrexate, all of which are DHFR inhibitors.
Pralatrexate is a polar, racemic small molecule (Molecular Weight of 477.5 g.mol-1), soluble in aqueous solutions. Pralatrexate is a mixture of diastereomers (stereoisomers that are not enantiomers, i.e. they are non-superimposable). Diastereomers can have different physical properties biological activities, and different reactivity. Pralatrexate has a volume of distribution (Vd) of 105L and 37L for the S- and R-diastereomers, respectively, a plasma protein binding (ppb) of 67%, a systemic clearance of 417 mL.min-1 (S-diastereomer) and 191 mL.min-1 (R-diastereomer), and an elimination half-life (T1/2)of 12-18 hours. Pralatrexate is not significantly metabolized by the phase I hepatic CYP450 isozymes or phase II hepatic glucuronidases, and has low potential to induce or inhibit the activity of CYP450 isozymes - elimination is primarily of unchanged drug in urine.
The recommended dosing of Pralatrexate is 30 mg.m-2 administrated as an intravenous injection once weekly for 6 weeks in 7-week cycles. The full prescribing information can be found here.

The structure (2S)-2-[[4-[(1RS)-1-[(2, 4-diaminopteridin-6-yl)methyl]but-3-ynyl]benzoyl]amino]pentanedioic acid is a folate analog in which the hydroxyl group of the pyrimidine ring has been replaced by an amine, and the central amino group of the molecule has been replaced by a stereocenter carbon with a methylacethylene attached to it (which may undergo nucleophilic atack). Pralatrexate diastereomers differ in configuration at this stereocenter only, and so they are also epimers.
The license holder is Allos Therapeutics, Inc. and the product website is www.folotyn.com.