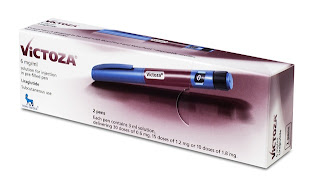 ATC code: A10BX07
Also approved in January is Liraglutide, on January 25th, under the trade name Victoza. Liraglutide, previously known as NN2211, is a glucagon-like peptide-1 (GLP-1) receptor agonist indicated as an adjunct to diet and exercise to improve glycemic control in adults with type 2 diabetes mellitus. People with this type of diabetes are often overweight, have high blood pressure and/or cholesterol and become insensitive to insulin. Type 2 diabetes is the commonest form of diabetes, and is a major health problem in 'developed' economies. Liraglutide ATC code is A10BX07.

Liraglutide works by activating the GLP-1 receptor (GLP-1R), which in turn stimulates the adenylyl cyclase pathway leading to insulin release in the presence of elevated glucose concentrations. GLP-1R is a class-II GPCR (also known as secretin receptor family). Liraglutide is the second GLP-1 agonist approved for the treatment of type 2 diabetes, after Exenatide (marketed as Byetta), which reached the market in 2005. Other -glutides in development include Taspgolutide (R1583 or BIM-507) developed by Roche, and Abiglutide (a stabilized GLP-1 analogue fused to serum albumin) from GSK. Liraglutide is an engineered form of the natural human GLP-1 peptide (one amino acid difference to the major circulating form of GLP-1, GLP-1(7-37) - an arginine replaces a lysine at position 34), an additional modification is the addition of palmitic acid attached via a glutamic acid spacer at position 26. The molecular weight of Liraglutide is 3751.2 Da.

Each standard dose contains 1.8mg of Liraglutide (equivalent to 480 nmol). Dosing is as a once daily subcutaneous (s.c.) injection. Liraglutide has a plasma half-life of ~13 hr (far longer than the ca. 2 min half life of the natural GLP-1 peptide). Slowing the fast degradation of GLP-1 is the basis of the therapeutic mechanism of the -gliptin class of DPP-IV inhibitors, e.g. Saxagliptin and Sitagliptin). The absolute bioavailability of Liraglutide, after s.c. dosing is 55%, and has high plasma protein binding > 98%. The volume of distribution Vd is 0.07L/kg, with a clearance of 1.2 L/h. Liraglutide has a boxed warning (risk of thyroid C-cell tumours). Victoza is marketed by Novo Nordisk and the product website is http://www.victoza.com.