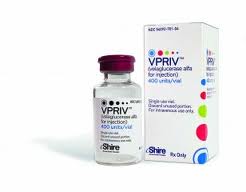 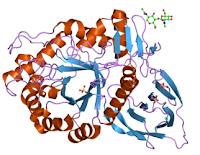 Other similar therapies include ERT with Imiglucerase (approved in 1994 under the trade name Cerezyme) and pharmacological chaperoning, which involves the use of orally administered drugs, like for example Miglustat (approved in 2003 under the trade name Zavesca), which works by inhibiting glucocerebroside synthase. Velaglucerase Alfa is a glycoprotein of 497 amino acids, with a molecular weight of ca. 63 kDa. It has a mean half-life of 11 to 12 minutes, a mean clearance ranging from 6.72 to 7.56 mL/min/kg and a mean volume of distribution (Vd) ranging from 82 to 108 mL/kg. The recommended dosage is 60 Units/kg administrated every other week as a 60-minute intravenous infusion. The full prescribing information can be found here. Velaglucerase Alfa is manufactured by Shire Human Genetic Therapies, Inc. and the product website is www.vpriv.com.