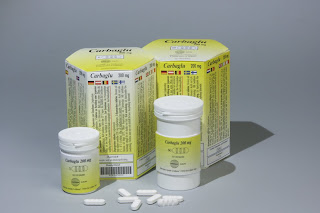 ATC code: A16AA05
On March 18th, the FDA approved carglumic acid to be marketed under the name Carbaglu as the first specific treatment for a rare form of hyperammonaemia. Carbaglu has been marketed in Europe since 2003. The ATC code is A16AA05.

Carglumic acid is used to treat a deficiency in the enzyme N-Acetyl Glutamate Synthase (NAGS), which leads to acute hyperammonaemia. NAGS deficiency is a very rare genetic disorder where a single base deletion in chromosome 17q leads to a frameshift mutation in the NAGS gene (UniProt: Q8N159) (this leads to a non-functional protein product). It is estimated that it occurs in one of ~50,000 births and due to the rareness of this autosomal recessive disorder, Carbaglu is considered as an orphan drug. NAGS deficiency manifests within the first week of life with unspecific symptoms such as failure to feed, low body temperature and sleepiness. If left untreated, the accumulation of ammonia (hyperammonemia) in the patient's blood causes lethargy, vomiting, deep coma and fatal cerebral oedema. 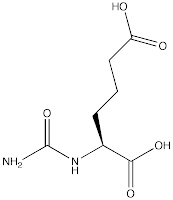 Carbaglu was developed by Orphan Europe and is marketed in the United States by Recordati S.p.A.
The full prescribing information for Carbaglu can be found here.