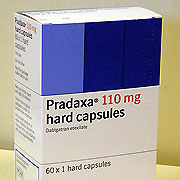 The formation of blood clots in the circulation can cause embolism or stroke (or CVA) if other risk factors are present.  Depending on the number of risk factors, the risk of suffering a stroke increases up to 7-fold in patients with atrial fibrillation. Patients with atrial fibrillation are therefore often treated with the anticoagulant warfarin (ChEMBL: 494165) to prevent the formation of blood clots, Warfarin is a drug with a poor therapeutic index, and also shows substantial intra-patient variability due to underlying genetic differences, with subsequent required regular patient monitoring.


Dabigatran etexilate is converted to the active drug Dabigatran. It inhibits blood clotting through direct inhibition of thrombin (Uniprot: P00734) and has a larger therapeutic window than warfarin (which is an irreversible inhibitor of vitamin K epoxide reductase). Thrombin is a key serine protease in the blood clotting cascade, activating coagulation factors Factor V, Factor VIII, Factor XI and Factor XIII as well as cleaving fibrinogen and thus transforming it to the blood clot forming fibrin (also known as Factor Ia) (Uniprot: P02679). There are many known structures of thrombin, both in prothrombin and mature thrombin forms (for example see PDBe:2bvs).

Thrombin is a trypsin-like serine proteinase (Pfam:PF00089), and cleaves after arginine (and lysine) residues at the P1 position in substrates; Dabigatran is a substrate mimic (a peptidomimetic), with the phenylamidine mimicking the arginine sidechain.

Upon absorpotion, Dabigatran etexilate is readily metabolized to the active drug Dabigatran by ester hydrolysis at two distinct positions (therefore Dabigatran is dosed as a double prodrug). The charged groups of Dabigatran (the amidine and carboxylic acid) are poorly absorbed across membranes, and therefor the lipophilic ester and carbamate are added to mask these groups during oral dosing and absorption. Dabigatran is further metabolized to four different acyl glucuronides which are equally active as thrombin inhibitors. The absolute oral biovailability of Dabigatran (dosed as the prodrug) is 3-7%. The fraction of dabigatran bound to plasma proteins (ppb) is ~35% and volume of distribution (Vd) is 50-70L, clearance is primarily renal with a half-life (t1/2) of 12-14 hours.