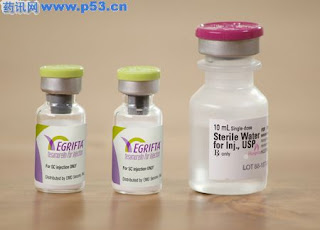 
Also this month, on November 10th, FDA has approved Tesamorelin under the trade name Egrifta. Tesamorelin (research code:TH-9507) is an analog of the human growth hormone-releasing factor (GRF) (UniProt:P01286, synonym:Somatoliberin, synonym:GRF, synonym:GHRH) indicated for the reduction of excess abdominal fat in HIV-infected patients with lipodystrophy. Lipodystrophy is a condition in which excess fat develops in atypical areas of the body, most notably around the liver, stomach, and other abdominal organs. This condition is observed as a side effect with many antiretroviral drugs used to treat HIV. Tesamorelin is the first-FDA approved treatment specifically approved for lipodystropy.


Tesamorelin is an N-terminally modified variant of the natural 44 residue long peptide, Somatoliberin, which is a hypothalamic peptide, acting on the pituitary somatotroph cells to stimulate the synthesis and pulsatile release of endogenous growth hormone (GH), which is both anabolic and lipolytic. Somatoliberin is a member of the glucagon family (Pfam:PF00123) of endogenous peptide ligands. Tesamorelin exerts its therapeutic effects by binding to, and being an agonist of GHRHr - a type-2 (or class B, or secretin-like) GPCR (Uniprot: Q02643, ChEMBL:CHEMBL158, Pfam:PF00002), on pituitary somatotrophs; the triggered release growth hormone (GH) in turn acts on a variety of target cells, including chondrocytes, osteoblasts, myocytes, hepatocytes and adipocytes, resulting in a host of pharmacodynamic effects, which are primarily mediated by insulin-like growth factor 1 (IGF-1) produced in the liver and in peripheral tissues.

Tesamorelin has Molecular Weight of 5135.9 Da, absolute bioavailability, following s.c. dosing is less than 4%, with a volume of distribution of 10.5 L/kg (in HIV-infected patients) and an elimination half-life (t1/2) of 38 minutes (again in HIV-infected patients). The recommended dosage is 2 mg injected subcutaneously daily (typically in the abdomen) - a typical daily dose is therefore 0.39 umol).

Tesamorelin is produced synthetically and is otherwise identical in amino acid sequence to that of human Somatoliberin/GRF. Tesamorelin is then modified by attachment a 3-hexenoyl moiety via an amide linkage to the N-terminal tyrosine residue. This chemical modification blocks proteolytic degradation by endogenous proteins such as DPP-IV, thus prolonging the half-life of the peptide (the inhibition of DPP-IV is itself the basis of a number of therapies for the treatment of type-II diabetes - the gliptins). A further chemical modification is the C-terminal amidation - this p.t.m. is found in the naturally produced peptide. Tesamorelin is closely chemically related to a number of other clinical agents, such as Sermorelin (which is a shorter, but still active version of Somatoliberin/GRF)

The license holder is EMD Serono, Inc. and the product website is www.egrifta.com.

jpo said…
Thanks to Dave Michalovich of Syntaxin for highlighting a error in the description of the mechanism of action.
23 November 2010 at 08:01

jpo said…
It's also tempting to speculate what positive side effects may be found from -gliptin therapy, for example if they prolong the half life of endogenous Somatoliberin, are there any lipodystrophy effects (probably not clinically useful), but it would be interesting to profile for the broad range of GH related effects. It may be that the pulsatile nature of many of these systems would suppress effects; but it would be interesting to look.
23 November 2010 at 08:39