ALL is a cancer of the white blood cells and can be fatal within weeks from the onset of the disease if it is left untreated. In ALL, there is an unproportional increase in the population of immature white blood cells, which crowd out functional immune cells as well as red blood cells and platelets, and in advanced stages of the disease infiltrate into tissues and organs, most frequently liver, spleen and lymph nodes. The symptoms of ALL in its initial stages are fatigue, anemia, frequent infections and fever as well as breathlessness and prolonged bleeding. ALL is caused by DNA damage and associated with exposure to radiation and cancerogenic chemicals. There are a number of typical chromosomal translocations, the most frequent in adults with ALL is the so called Philadelphia chromosome, where a translocation of chromosomes 9 and 22 results in the formation of the fusion gene bcr-abl (CHEMBL1862). Treatment of ALL is usually encompasses the three phases i) remission induction, which aims to quickly kill off 95% of the cancerous cells, ii) consolidation to further reduce the tumor burden and iii) maintenance with the aim to prevent a relapse caused by stray surviving leukemic cells.

Aspariginase is part of the remission induction regimen and used in combination with other cytostatic and cytotoxic drugs including prednisolone (CHEMBL131), dexamethasone (CHEMBL384467) , vincristin (CHEMBL303560) and daunorubicin (CHEMBL178). Asparaginase is an enzyme (EC 3.5.1.1) that catalyzes the hydrolysis of asparagine (CHEBI:17196)  to aspartic acid (CHEBI17053) as shown below. Unlike healthy body cells, leukemic cells rely on the presence of extracellular asparagine for protein metabolism and survival, hence the beneficial effect for ALL patients. Conventionally, asparaginase for he treatment of ALL is derived from the bacterium Escherichia coli (corresponds to Uniprot:P00805) but some patients (estimated 10-15%) become allergic to this enzyme. For these patients, the ortholog from the bacterium Erwinia crysanthemi (Uniprot-Id P06608) is available to replace the untolerated treatment.

Asparaginase Erwinia crysanthemi is a tetrameric enzyme composed of four identical subunits each weighing about 35kDa. The crystal structures of many asparaginase enzymes are known, including that of the closely related protein from Erwinia carotovora (PDBe:2jk0) 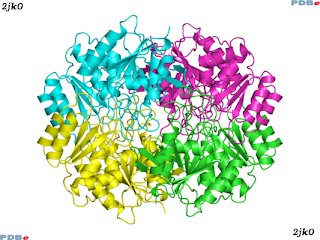 The pharmakokinetic paramaters of Erwinaze were not determined in clinical trials, serum concentrations greater than 0.1 International Units/mL were reached by all patients within 72 hours of the third injection of aspariginase Erwinia chrysanthemi.

Side effects reported in the study include serious hypersensitivity reactions, pancreatitis, glucose intolerance, thrombosis and hemorrhage.

Asparaginase Erwinia chrysanthemi is marketed in the US by Eusa Pharma under the trade name Erwinaze. In a number of other countries, it is available under the name Erwinase.

Package information can be found here.