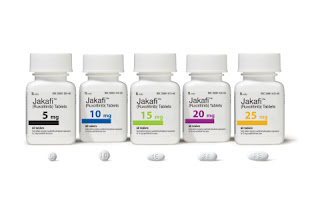 
Myelofibrosis is a disorder of the bone marrow, in which the marrow is replaced by scar (fibrous) tissue. Scarring of the bone marrow reduces its ability to blood cells, and can lead to anemia, bleeding problems, and a higher risk of infections due to reduced white blood cells. It is also associated with engorgement of organs suchs as the spleen and liver. Primary myelofibrosis may develop to secondary myelofibrosis - including leukemia and lymphoma. Myelofibrosis is associated with dysregulated Janus kinases JAK1 and JAK2, and some with a somatic mutation in JAK2 (JAK2V617F) (OMIM). JAK signaling involves recruitment of STATs (signal transducers and activators of transcription) to cytokine receptors, activation and subsequent localization of STATs to the nucleus leading to modulation of gene expression. Oral administration of ruxolitinib prevented splenomegaly, preferentially decreased JAK2V617F mutant cells in the spleen and decreased circulating inflammatory cytokines. 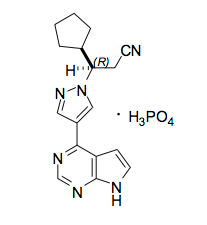 Ruxolitinib (IUPAC: (R)-3-(4-(7H-pyrrolo[2,3­ d]pyrimidin-4-yl)-1H-pyrazol-1-yl)-3-cyclopentylpropanenitrile phosphate; (Standard InCHI key: HFNKQEVNSGCOJV-OAHLLOKOSA-N) has a molecular weight of 404.36, an AlogP of 2.88 and complies with all components of Lipinski's rule of 5.

Ruxolitinib is administered orally as the phosphate salt as tablets and dosed according to platelet count (hence the large range of dosage forms). Each tablet contains ruxolitinib phosphate equivalent to 5 mg, 10 mg, 15 mg, 20 mg and 25 mg of ruxolitinib free base. The Tmax for Ruxolitinib is 1-2 hours post dosing, with exposure (Cmax and AUC) linear over a dose range of 5mg to 200mg. Oral absorption is in excess of 95%. The volume of distribution is 53-65 L, with plasma protein binding in excess of 97%. Ruxolitinib is predominantly metabolized by CYP3A4, with the two primary metabolites displaying weaker, but still significant pharmacological activity against their specific targets. Administration of ruxolitinib with ketoconazole, a potent CYP3A4 inhibitor, prolongs the half life of ruxolitinib from 3.7 to 6.0 hours, increases the Cmax to 33% and the AUC to 91%. The change in the pharmacodynamic marker, pSTAT3 inhibition, was consistent with the corresponding ruxolitinib AUC following concurrent administration with ketoconazole.

The license holder for Jakafi is Incyte, and the full prescribing information can be found here.

Unknown said…
Thanks for the post it prompted me to do some ChemSpider curation and deposition. However, as I looked at the post and the data, there is some confusion about Ruxolitinib and Jakafi. While they are related they are not exactly the same, but in the post this is not always clear.

Unknown said…
Actually, as soon as I posted that last comment I realised that there is another serious error in the post, and as a result in the ChemSpider links that I posted. The image that is in the post is the correct enantiomer (R), however the ChEMBL article and standard InChIkey are for the S-enantiomer.

The correct ChemSpider links are,

jpo said…
Hi, Thanks Dave. You are right.

The post failed to discriminate between the dosed salt (ruxolitinib phosphate) and the active compound form (ruxolitinib). I've reworded this.

More interesting though is that the original ChEMBL structure came from the paperhttp://www.sciencedirect.com/science?_ob=MiamiImageURL&_cid=271398&_user=776054&_pii=S0960894X10014770&_check=y&_origin=&_coverDate=15-Dec-2010&view=c&wchp=dGLbVlt-zSkzk&md5=f0b47b7a41bbbfcea9c233b718ea7531/1-s2.0-S0960894X10014770-main.pdf and the structure is correct as drawn in the primary literature, since this is the only version currently in ChEMBL, the wrong enantiomer was tagged. So it is an example of an error in the literature being propagated. It's quite interesting, that the paper itself is about a different series, and the Incyte compound is listed as prior art, and we know from some error benchmarking in ChEMBL, that chemists drawing someone else's compound is a common source of errors.