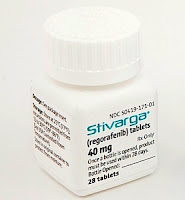 
On September 27th 2012 the FDA approved Stivarga (Regorafenib) for the treatment of metastatic colorectal cancer who have previously received chemotherapy, anti-EGFR or anti-VEGF therapy.
Colorectal or bowl cancer is one of the most common cancers in the western world, is the third most common cancer in the United States and the second most common cause of cancer deaths in the United Kingdom (according to CRUK). While Five-year survival rates of the primary cancer have been improving due to the availability of targeted therapy, they only extend to about 50%, however, the metastatic disease has poor prognosis. In clinical trials Regorafenib showed statistically significant improvement in survival of patients with metastatic disease as compared to the best standard care alone, with the median survival being extended from 5 to 6.4 months.

Regorafenib is metabolized by CYP3A4 and UGT1A9. The main circulating metabolites of regorafenib measured at steady-state in human plasma are M-2 (N-oxide) and M-5 (N-oxide and N-desmethyl).


Regorafenib has been approved with a boxed warning due to severe hepatotoxicity which can be fatal.

Stivarga is marketed by Bayer