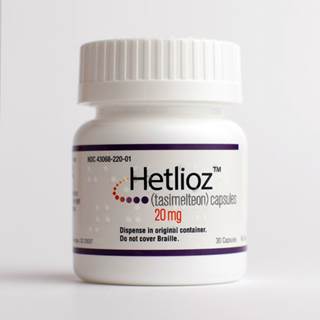 
Non-24-hour sleep–wake disorder (Non-24) is a chronic circadian rhythm sleep disorder, mostly affecting blind people. It is characterised by insomnia or excessive sleepiness related to abnormal synchronization between the 24-hour light–dark cycle and the endogenous circadian cycle (slightly longer than 24 hours). This deviation can be corrected by exposure to solar light, which resets the internal clock, however, the loss of photic input, and the absence of light perception in the majority of patients, prevents them from drifting back into normal alignment.


Tasimelteon is an agonist at melatonin MT1 and MT2 receptors, with a relative greater affinity for MT2. These receptors are thought to be involved in the control of circadian rhythms, consequently, the binding of tasimelteon to these receptors, and the resulting induced somnolence, is believed to be the mechanism by which tasimelteon aids in the synchronisation of the internal circadian clock with the 24-hour light–dark cycle.


Melatonin receptors (Uniprot accession: P48039 and P49286; ChEMBL ID: CHEMBL2094268) are members of the G-protein coupled receptor 1 family. There are no known 3D structures for these particular proteins though, however there are now several relevant homologous structures of other members of the family (see here for a current list of representative rhodopsin-like GPCR structures).


The -melteon USAN/INN stem covers selective melatonin receptor agonists. Tasimelteon is the second approved agent in this class, following the approval of Takeda's Ramelteon in 2005. Contrary to its predecessor, tasimelteon is not currently indicated to treat insomnia, and has received orphan-product designation by the FDA. Agomelatine is another member of this class, but only approved in Europe (PMID: 18673165). 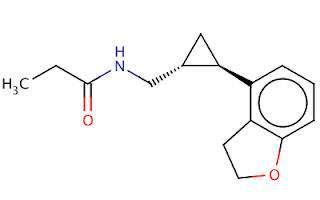 
Tasimelteon is available as oral capsules and the recommended daily dose is one single capsule of 20 mg, taken before bedtime, at the same time every night. The peak concentration (Cmax) is reached at 0.5 to 3 hours after fasted oral administration, and at steady-state in young healthy subjects, the apparent oral volume of distribution (Vd/F) is approximately 56-126 L. Tasimelteon should not be administered with food, since food decreases its bioavailability, lowering the Cmax by 44%, and delaying the Tmax by approximately 1.75 hours. At therapeutic concentrations, tasimelteon is strongly bound to plasma proteins (90%).


The license holder for HetliozTM is Vanda Pharmaceuticals, and the full prescribing information can be found here.