On February 18th the FDA approved Droxidopa (tarde name Northera™) for the treatment of neurogenic orthostatic hypotension (NOH). NOH is a rare, chronic and often debilitating drop in blood pressure upon standing, and is associated with Parkinson's disease, multiple-system atrophy, and pure autonomic failure. Symptoms of NOH include dizziness, light-headedness, blurred vision, fatigue and fainting when a person stands. 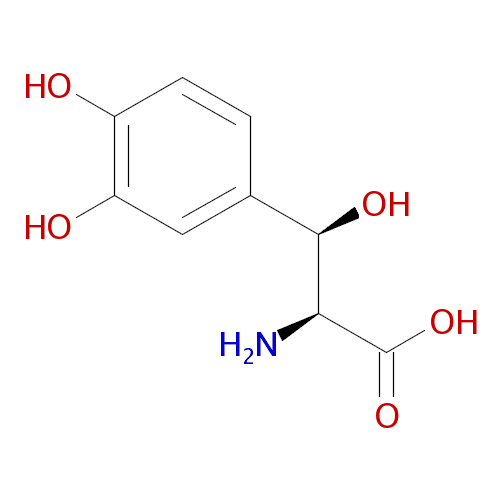 
Dosage
Droxidopa starting dose is 100mg three times daily (which can be titrated to a maximum of 600 mg three times daily). One dose should be taken in late afternoon at least 3 hours prior to bedtime to reduce the potential for supine hypertension during sleep.

Warnings
Neuroleptic malignant syndrome (NMS) has been reported with Droxidopa use during post-marketing surveillance in Japan. NMS is an uncommon but life-threatening syndrome characterized by fever or hyperthermia, muscle rigidity, involuntary movements, altered consciousness, and mental status changes.

Pharmacokinetics
Absorption
Cmax of droxidopa were reached by 1 - 4 hours post-dose in healthy volunteers. High-fat meals have a moderate impact on droxidopa exposure with Cmax and AUC decreasing by 35% and 20% respectively, and delaying Cmax by approximately 2 hours.

Distribution
Droxidopa exhibits plasma protein binding of 75% at 100 ng/mL and 26% at 10,000 ng/mL with an apparent volume of distribution of about 200 L.

Metabolism
The metabolism of droxidopa is mediated by catecholamine pathway and not through the cytochrome P450 system. Plasma norepinephrine levels peak within 3 to 4 hours (generally < 1 ng/mL) and variable with no consistent relationship with dose. The contribution of the metabolites of droxidopa other than norepinephrine to its pharmacological effects is not well understood.

Drug Interactions
No dedicated drug-drug interaction studies were performed for droxidopa. Carbidopa, a peripheral dopa-decarboxylase inhibitor, could prevent the conversion of droxidopa to norepinephrine outside of the central nervous system (CNS).

Dopamine agonists, amantadine derivatives, and MAO-B inhibitors do not appear to effect droxidopa clearance, no dose adjustments are required.

Pregnancy
Droxidopa is classified as pregnancy category C. There are no adequate and well controlled trials in pregnant women.

The license holder is Chelsea Therapeutics, the prescribing information can be found here.