On February 24th 2014, the FDA approved metreleptin (Tradename: Myalept), a leptin analogue, as an adjunct to diet and replacement therapy, for the treatment of complications associated with leptin deficiency in patients with congenital or acquired generalized lipodystrophy.


Lipodystrophy is a rare condition characterized by abnormalities in adipose (fat) tissue distribution. It can be congenital, i.e. the patient is born with little or no adipose tissue, or it can be acquired, for example, after prolonged antiretroviral drug therapy some patients keep on losing adipose tissue with time. The deficiency of adipose tissue leads to hypertriglyceridemia and ectopic deposition of fat in non-adipose tissues such as liver and muscle, contributing to metabolic abnormalities including insulin resistance.

Leptin is an endogenous hormone, predominantly secreted in the adipose tissue, responsible to signal to the central nervous system, the status of energy stores in the body. In patients with lipodystrophy, the levels of this hormone are lower, resulting in excess caloric intake, which exacerbates the metabolic abnormalities.


Metreleptin is a recombinant human leptin analogue, which exert its function by binding to and activating the human leptin receptor. This increases insulin sensitivity and reduces food intake, soothing the metabolic abnormalities of patients with lipodystrophy.


Leptin receptor (Uniprot accession: P48357; ChEMBL ID: CHEMBL5913) is a member of the cytokine family class I, which signals through the JAK/STAT transduction pathway. Currently, there is one crystal structure of the human leptin receptor in complex with an antibody (PDBe: 3v6o). The structure is shown bellow, and the leptin receptor is depicted in green. 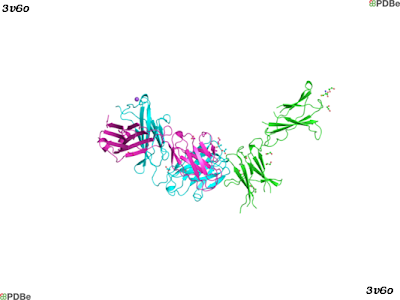 The -leptin USAN/INN stem covers leptin derivatives. Metreleptin is the first approved drug of its class, and the only member so far. In Japan, metreleptin was approved on May 25 th 2013 for the treatment of metabolic disorders, including lipodystrophy (see PMID: 23740412).


Metreleptin (ChEMBL: CHEMBL2107857) is a recombinant human leptin analog produced in E. coli and differs from native human leptin by the addition of a methionine residue at its amino terminus. Metreleptin is a 147-amino acid, nonglycosylated, polypeptide with one disulfide bond between Cys-97 and Cys-147 and a molecular weight of approximately 16.15 kDa.


Metreleptin is available as a lyophilized cake, which is later reconstituted with bacteriostatic or preservative-free sterile water, for subcutaneous injection. The recommended starting daily dose is 0.06 mg/kg in patients weighting less than 40 kg, 2.5 mg in male patients weighting more than 40Kg, and 5 mg in female patients weighting more than 40 kg, with a respective maximum daily dose of 0.13 mg/kg, 10 mg and 10 mg. In healthy subjects, the peak serum concentration (Cmax) of leptin is reached at 4.0 to 4.3 hours after subcutaneous administration of single doses ranging from 0.1 to 0.3 mg/kg, and following intravenous administration of metreleptin, leptin volume of distribution is 370 ± 184 mL/kg for a dose of 0.3 mg/kg/day. Metreleptin bioavailability is not influence by food intake, hence it can be administered without regard to the timing of meals.


No formal metabolism studies have been conducted with metreleptin, however, nonclinical data indicates renal clearance is the major route of metreleptin elimination, with no apparent contribution of systemic metabolism or degradation. In healthy subjects, following single subcutaneous doses of 0.01 to 0.3 mg/mL, the half-life t1/2 of metreleptin is 3.8 to 4.7 hours.


Metreleptin has been approved with a black box warning due to the risks associated with the development of antimetreleptin antibodies that neutralize endogenous leptin and/or metreleptin and the risk for T-cell lymphoma. Consequently, metreleptin is only available through the Myalept Risk Evaluation and Mitigation Strategy (REMS) Program.


The license holder for MyaleptTM is Amylin Pharmaceuticals, a subsidiary of Bristol-Myers Squibb, and the full prescribing information can be found here.