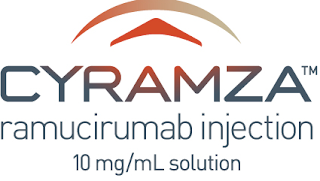 On April 21, 2014 the FDA approved Ramucirumab (Cyramza™) for the treatment of patients with advanced or metastatic, gastric or gastroesophageal junction (GEJ) adenocarcinoma with disease progression on or after prior treatment with fluoropyrimidine- or platinum-containing chemotherapy.

Gastric cancer has a very poor prognosis, with adenocarcinomas constituting ~95% of all gastric cancers (CRUK).

In a randomized, double-blind, multicenter study of ramucirumab plus best supportive care (BSC) compared with placebo plus BSC of 355 patients with locally advanced or metastatic gastric cancer (including adenocarcinoma of the gastro-esophageal junction [GEJ]), ramucirumab improved the overall survival to a median of 5.2 months, compared to 3.8 with the placebo arm. Progression-free survival (PFS) was improved from a median of 1.3 months in the placebo arm to 2.1 months in the ramucirumab arm.

Cyramza has been issued a boxed warning because of increases in the risk of hemorrhage, including severe and sometimes fatal hemorrhagic events. 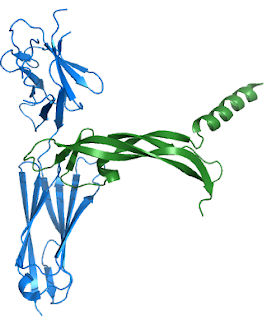 The structure of extracellular domains 2 and 3 of KDR (VEGFR2) in blue in complex with its ligand VEGFC in green. PDB=2x1x


The target of ramucirumab is the extracellular ligand-binding domain of the receptor tyrosine kinase, Vascular endothelial growth factor receptor 2 (KDR, also known as VEGFR2; Uniprot = P35968 ; ChEMBL = CHEMBL279 ;
canSAR = P35968). Ramucirumab specifically binds to KDR (VEGFR2) thus preventing the binding of its ligands VEGF-A, VEGF-C, and VEGF-D. This blockade inhibits ligand-stimulated activation of VEGF Receptor 2 and consequently, inhibits ligand-induced proliferation and migration of human endothelial cells. Elevated expression of the ligands has been shown to be clinically correlated with survival and with metastasis in gastric cancers.

Cyramza™ is a product of Eli Lilly & Co.

The full prescribing information can be found here