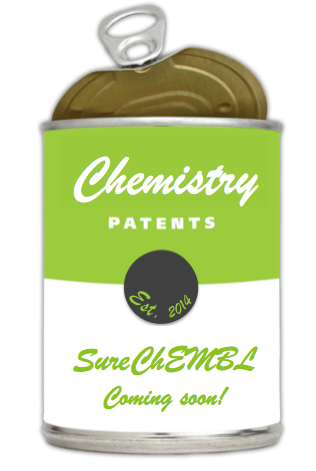 In the coming weeks we will be very pleased to announce the release of the new SureChEMBL website. Since the beginning of the year, we have been working hard with the folks over at Digital Science, along with all the content and software providers to get the system setup and running on our own Amazon Web Service controlled environment. As we approach the final stages of the transition, we will need to temporarily halt access to the original SureChem site. The reason for this minor disruption is to allow us to complete the testing of the additional functionality we have added to the SureChEMBL user interface.

We will use ChEMBL-og as the primary route of communicating with users, so if you want to be kept up to date, bookmark the site. We will also make ad hoc tweets about SureChEMBL on @johnpoverington, @georgeisyourman, @surechembl and @chembl.

Users familiar with the previous SureChem UI will find a lot in common with the new SureChEMBL UI. A summary of the changes and new features we have added to the SureChEMBL UI are provided below:
We will be keeping an eye on usage of the UI, and don;t know what to expect in terms of new users. We will then review scaling hardware to cope with the load now that the default 'Pro' system is open to all.

In line with ChEMBL IDs, all compounds in SureChEMBL have been given SCHEMBL identifiers. For example, SCHEMBL1353 corresponds to 2-(acetyloxy)benzoic acid, aka aspirin. The identifier can be used to access the SureChEMBL compound page and will be included in all SureChEMBL downloads.

The SureChEMBL pipeline has been running daily throughout the summer and has now processed and extracted an additional ~400,000 novel compounds from patents since SureChem’s pipeline freeze. At the time of writing (16:22 22/08/14), the SureChEMBL counts are:
The rate of novel compounds and annotated patents is truly staggering: There are approximately 80,000 compounds extracted from 50,000 patents that are added to the system every month. Moreover, the latency for a new patent document from its application date to becoming searchable in the system is only between 2 and 7 days, in most cases.

The complete SureChEMBL structure repository has been added to UniChem (src_id=15)  and consists of 15.2M unique structures mapped to their SCHEMBL IDs. SureChEMBL updates will be added to UniChem on a weekly basis, so that UniChem will be up to date with novel patent chemistry.

Besides availability in UniChem, the complete SureChEMBL structure repository is provided as SD and tsv file in our ftp site:

It has to be emphasised here that this is the raw compound feed as extracted automatically from text and images and is provided without any further filtering or manual curation. This feed contains fragments, radicals, atoms with wrong valencies, polymers and other oddities but if you are the sort of person who wants to use this raw data, you will know what and how to filter things you don't like out.

The chemical registry rules between SureChEMBL and ChEMBL have not been fully aligned yet - they use fundamentally different toolkits - so there are sometimes multiple SCHEMBL ids for the same InChI - if you know this is an issue, you will know how to fix it for your local purposes if you download the data.

Initially, the SureChEMBL files on the ftp site will be updated on a quarterly basis.

Going forward we have many plans related to SureChEMBL, some of which are linked to our involvement in the Open PHACTS project. Our current plans include:
You will hear more about these plans over the coming year, but our top priority now is to deliver the new SureChEMBL user interface.