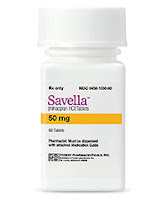 An occasional series of posts with news and top level details on new FDA drug approvals. The series is a little retrospective at the moment, but it will not take much time to catch up for 2009.

First 'out of the gates' on 14th Jan this year is an 'old' compound, Milnacipran (Savella in the US) for the treatment of fibromyalgia syndrome. Milnacipran is an SNRI (Serotonin Norepinephrine Reuptake Inhibitor, and as such blocks the function of the norepinephrine transporter NET and the serotonin transporter SERT), like all compounds of this pharmacological class, the molecule is small (Molecular Weight of 246.4 g.mol-1 for Milnacipran itself, and 282.2 g.mol-1 for the HCl salt) is fully Rule-Of-Five compliant, has high aqueous solubility, and also has good oral absorption (85% bioavailable) and metabolism characteristics. (A plasma half-life of ca. 8 hours, a volume of distribution of 400L, low plasma protein binding at 13%. Excretion is renal (through the kidneys and urine) and excretion is primarily of the unchanged drug (55% unchanged). With a molecule like this, it should come as no surprise that it is delivered orally. Recommended dosage is 100mg (or ~354µmol, or ~177µmol of the pharmacologically active enantiomer, see below) per day, although dosing is phased from a low dose to 'full' dose over a week. Milnacipran is more potent at blocking norepinephrine uptake than serotonin uptake. The full prescribing information is here.

Milnacipran has a boxed warning (colloquially known as a 'black box').

Notable features of the chemical structure ((±)-[1R(S),2S(R)]-2-(aminomethyl)-N,N-diethyl-1- phenylcyclopropanecarboxamide hydrochloride) are the primary amine (the NH2) which is basic (it can be protonated and therefore positively charged), which will dominate its physicochemical properties. The remainder of the molecule is quite lipophillic. Of further note is the cyclopropane ring (the triangle part in the middle), which is completely rigid and will dominate the three-dimensional properties (shape) of the drug. The functional groups attached to the cyclopropane are attached with mixed stereochemistry, so the drug is 'racemic' - for this reason stereochemistry is not explicitly shown on the the 2-D structure below. However, the stereoisomers have different pharmacological activity, with the 'active' d-isomer having different properties (e.g. a longer half-life) to the 'inactive' l-isomer Finally, the approved drug is not Milnacipran itself, but the Hydrochloride salt (so in the tablet the amine is indeed protonated, as discussed above).

I mentioned it was an old compound, well it is, just that old is relative. The SNRI/SSRI therapeutic classes are old ones, and several drugs of these related classes are now available generically. SSRIs and SNRIs are primarily 'antidepressant' drugs, and this compound itself has been used in certain countries for some time (Austria, since 1998, and also at least Chile and Israel), there has been much interest in expanding the clinical use of SSRIs/SNRIs beyond their original antidepressant actions. As one would expect, the commercial history of Milnacipran appears quite complicated, and the latest approval is for a 'new' therapeutic indication - fibromyalgia (chronic and widespread muscle pain). Fibromyalgia is a complicated disease with several competing theories for its causes, and is often associated/comorbid with depression.

The license holder for Milnacipran is Cypress Bioscience and the product website is www.savella.com