Approved on November 5th 2009 was Romidepsin (trade name Istodax). Romidepsin, previously known by the research codes FK-228, FR-901228 and NSC-630176, is a histone deacetylase (HDAC) inhibitor indicated for the treatment of cutaneous T-cell lymphoma (CTCL) in patients who have received at least one prior systemic therapy. CTCL is a slow-growing cancer of infection-fighting white blood cells called T-lymphocytes. Romidepsin binds directly to the HDAC active site blocking substrate access. HDACs catalyze the removal of acetyl groups from acetylated lysine residues in histones, resulting in the modulation of gene expression. Romidepsin causes the accumulation of acetylated histones, and induces cell cycle arrest and apoptosis of cancer cells. Romidepsin is the fourth drug to be approved for CTCL, after Vorinostat (trade name Zolinza), Bexarotene (trade name Targretin) and Denileukin Difitox (trade name Ontak). Vorinostat is a small-molecule drug which also inhibits HDACs, whereas Bexarotene is a small-molecule retinoid selective for retinoid X receptors and Denileukin Difitox is an engineered protein combining interleukin-2 and diphtheria toxin, which binds to interleukin-2 receptors and introduce the diphtheria toxin into cells that express those receptors, killing the cells. Romidepsin is a Natural Product drug discovered from a fermentation broth of the bacteria Chromobacterium violaceum. It is a cyclic peptide with a molecular weight of 540.71 g.mol-1. It is highly protein bound in plasma (92% to 94%), with alpha1-acid-glycoprotein being the principal binding protein. Romidepsin undergoes extensive metabolism primarily by CYP3A4 with minor contribution from CYP3A5, CYP1A1, CYP2B6 and CYP2C19. It has a terminal half-life of ~3 hours. Among one of the potential adverse events is the propensity for the compound to increase QT interval. The recommended dose of Romidepsin is 14 mg.m-2 administrated intravenously over a 4-hour period on days 1, 8 and 15 of a 28-day cycle. The full prescribing information can be found here. 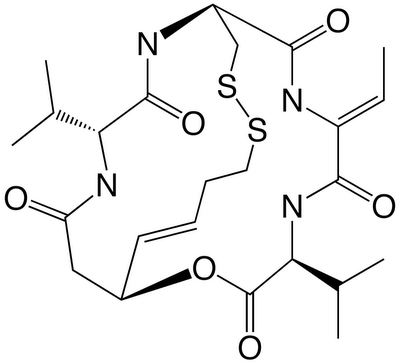 Romidepsin's chemical structure is (1S,4S,7Z,10S,16E,21R)-7-ethylidene-4,21-bis(1-methylethyl)-2-oxa-12,13-dithia-5,8,20,23-tetraazabicyclo[8.7.6]tricos-16-ene-3,6,9,19,22-pentone. It is a cyclic depsipeptide (peptide in which one or more amide bonds are replaced by ester bonds) with four component amino acids and a beta-hydroxyamide moiety (an amide and an hydroxy functional groups separated by two carbons atoms), which collectively form a 16-membered lactone with a disulfide bridge. The disulfide bond is reduced in the cellular environment, releasing the free thiol analogue as the active species. The manufacturer of Romidepsin is Gloucester Pharmaceuticals, Inc. and the product website is www.istodax.com.