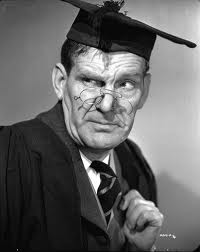 We have set up a schedule for the ChEMBL webinars for the first half of 2012. We strongly recommend that people developing against the ChEMBL schema, or performing data-mining attend the relevant webinars, since there are a few gotchas for the unwary, or those who don't like documentation ;)

Times and subjects covered are as follows. Note all times are UK local times, and the dates span the application of Daylight Savings Times, so watch out! Secondly, details of how to participate in each meeting will be made available on the blog about a week before the scheduled webinar.

The picture is of Will Hay, a great British comic actor of the 1920's and 30's - dressed as one of his classic schoolmaster roles - boys of a certain age (especially tubby 47 year old boys, just like me) will remember the films being on TV during the summer holidays in the 1970s. Anyway, one cool thing about him was that he was a keen amateur astronomer, and discovered the Great White Spot on Saturn (although see the wikipedia article for a fuller description of some earlier observations).