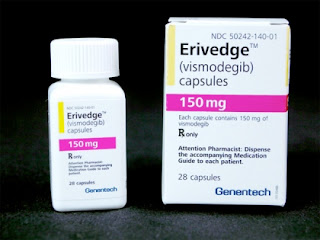 This is a novel first-in-class medicine, which for the first time modulates the hedgehog pathway. The target of Vismodegib is smoothened (SMO) (UniProt:Q99835, CanSAR:link). SMO is a class F (or class 6) G-Protein Coupled Receptor (GPCR) also known as the Frizzled/Smoothened class (pfam:PF01534). Smoothened is distinct and different to the previously 'drugged' GPCRs (which primarily target class A/class 1 receptors). The 3D-structures of smoothened or any of its homologues have not been characterised and are believed to differ from Class 1 GPCRs. 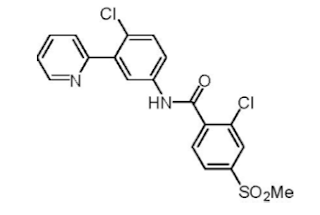 Vismodegib is a highly permeable compound with low aqueous solubility (BCS Class 2) - the single dose absolute bioavailability of vismodegib is 31.8%. Absorption of vismodegib is saturable - shown by the lack of dose proportional increase in exposure after a single dose of 270 mg or 540 mg vismodegib.  The volume of distribution (Vd) of vismodegib ranges from 16.4 to 26.6 L, and plasma protein binding is greater than 99% - with binding observed to both human serum albumin (ALB) and alpha-1-acid glycoprotein (also known as Orosomucoid, ORM, AGP and AAG), it is also a substrate of the efflux transporter P-glycoprotein (P-gp). Greater than 98% of the total circulating drug-related components are the parent drug. Minor metabolic pathways of vismodegib in humans include oxidation, glucuronidation, and pyridine ring cleavage. Vismodegib and its metabolites are eliminated primarily by the hepatic route with 82% of the administered dose recovered in the feces and less than 5% in urine. The estimated elimination half-life (t1/2) of vismodegib is 4 days after continuous once-daily dosing, and 12 days after a single dose.

Vismodegib has a boxed warning for potential risk of causing embryonic death and serious birth defects.

The license for Vismodegib is held by Genentech.