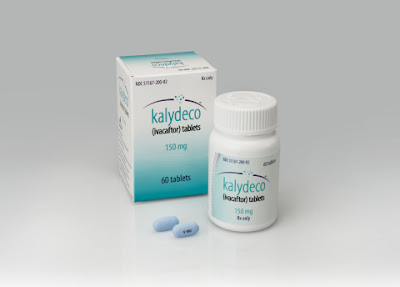 ATC code R07AX02
Wikipedia Ivacaftor
On January 31st, FDA approved Ivacaftor (previously known as VX-770, trade name Kalydeco) as a first-in-class oral drug for the treatment of a rare form of Cystic Fibrosis in patients aged 6 or older, caused by a G551D mutation of the CFTR gene.

Ivacaftor is the first drug directly targeting CFTR rather than CF symptoms alone. It is estimated that about 1 in 20 to 1 in 25 people unsymtomatically carry one allele of the defective gene, with about 1 in 2000 to 1 in 3000 newborns being homozygous for defective CFTR. Numerous mutations may cause disfunctional products of the CFTR gene. More than two thirds of cases are caused by ΔF508, the deletion of Phenylalanine at position 508 of the CFTR protein (UniProt P13569), leading to failure of targeting the protein to the plasma membrane. The G551D mutation Ivacaftor is approved for less than 5% of CF cases (about 1,200 patients in the United States). With this mutation, the protein is transported to the plasma membrane correctly, but ion transport is impaired. Ivacaftor improves ion transport, and is therefore a CFTR potentiator. Currently, Vertex are developing a further compound, VX-809  targeting the ΔF508 mutation (currently in phase 2), and Ataluren, targeting nonsense mutations, is in phase 3 clinical trials.

Peak plasma concentrations (Tmax) occur at about 4 hours post administration with a Cmax of 768 ng/mL and mean apparent volume of distribution of 353 L. The main route of clearance of Ivacaftor is fecal with an apparent terminal half-life (t1/2) of 12 hours for a single dose. Ivacaftor is known to interact with drugs that inhibit CYP3A, such as ketoconazole and fluconazole, both antifungal agents, and grapefruit juice, or drugs inducing CYP3A, such as the bactericidal antibiotic rifampin. Ivacaftor has not been tested in pregnant or nursing populations, infants younger than 6 years, or geriatric populations (CF being a disease mostly affecting young adults).

Ivacaftor has been developed by Vertex Pharmaceuticals (which it is also marketed by), and the Cystic Fibrosis Foundation.
The product website can be found here, and the full prescribing information, here.