Epilepsy is neurological disorder characterised by abnormal neuronal activity in the brain. Partial-onset seizures, as opposed to generalised seizures, affect initially only one part of the brain and, depending on the part of the brain that is affected, these seizures will present different symptoms.

Eslicarbazepine (ChEMBL: CHEMBL315985), the bioactive ingredient of the prodrug Eslicarbazepine Acetate, exerts its anticonvulsant activity by blocking the voltage-gated sodium channel (VGSC). VGSC has 3 distinctive states: the resting state, during which the VGSC is closed but responsive to a depolarisation impulse, the open state, during which the channel is open allowing the sodium ion to enter the cell, and the inactivated state, in which the channel is closed again but irresponsive to voltage changes. Eslicarbazepine binds and stabilises the inactive form of the VGSC, preventing its reversion to the resting form and limiting sustained repetitive neuronal firing.

VGSC (ChEMBL: CHEMBL2331043) is a single alpha-subunit with four repeat domains each containing six transmembrane segments. A 3D structure of the VGSC in an open conformation (PDBe: 4f4l) is shown below. 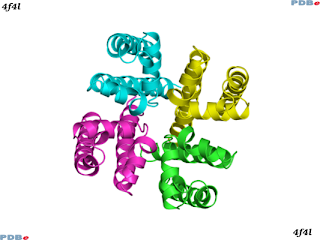 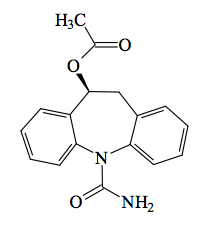