Blood cancer
The three main categories of blood cancer are leukemia, lymphoma and myeloma. Lymphoma is also split into two types: Hodgkin lymphoma and non-Hodgkin lymphoma. Both leukemia and myeloma occur in the bone marrow, whilst lymphoma is a cancer that is isolated to the lymphatic system. Acute leukemia is where there is an abundance of underdeveloped white blood cells that can’t function properly and chronic leukemia is where there are just far too many white blood cells, which is just as bad as having too few. Myeloma is where the plasma cells form tumours in the bone marrow. 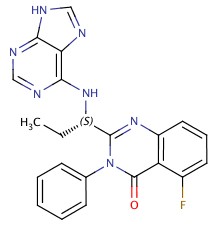 Mode of action
Idelalisib works on patients by inhibiting the PI3 kinase delta isoform (PI3Kδ), which plays an important role in malignant lymphocyte survival. It is the delta and gamma forms that are specific to the hematopoietic system. This treatment impairs the normal tracking of CLL lymph nodes. It can be used in conjunction with Rituxan (rituximab), an existing blood cancer treatment, for relapsed CLL and on its own for FL and SLL.

Clinical trials
Clinical trials were carried out on 220 patients, with relapsed CLL, who were not healthy enough, due to co-existing medical conditions or damage from previous chemotherapy, to receive cytotoxic therapy. Patients were administered either idelalisib plus rituximab or a placebo and rituximab. Most of these patients were 65 years of age or older.
After 24 weeks, 93% of the group who had taken the combination treatment were disease progression-free, compared to only 46% of the group who had received the placebo and rituximab combination.
After 12 months, 90% of the dual drug combination group were alive, compared to 80% of the placebo-containing group. [NCI]

Indication and Warnings
This drug can be used in combination with rituximab or on its own, indicated for patients with relapsed conditions. There are several warnings for idelalisib, including hepatotoxicity, pneumonitis (fatal and serious), intestinal perforation and embyro-fetal toxicity. [FDA]

Trade Names
Idelalisib was developed by Gildead Sciences and is marketed under the name Zydelig.