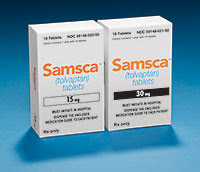 Latest through the gates is Tolvaptan (trade name Samsca), approved on May 21st 2009. Tolvaptan is a first-in-class oral vasopressin receptor antagonist used for the treatment of hyponatremia (low plasma sodium levels). Tolvaptan (previously known as the research code OPC-41,061) is selective for the Vasopressin V2 receptor isoform (reportedly 29 fold selective over the V1a receptor isoform. There are a number of -vaptans (the USAN stem for vasopressin antagonists) of varying selectivity profiles in clinical trials (including Conivaptan, Relcovaptan, SSR-149,415, Lixivaptan, Mozavaptan, and Satavaptan) for a variety of differing indications; but Tolvaptan is the first to be approved in the US.

Tolvaptan has a boxed warning (colloquially known as a 'black box').

Tolvaptan is a racemic small molecule drug (Molecular Weight of 448.9 g.mol-1) and is a lipophilic drug, is essentially insoluble in water, and has fair oral absorption (>40% bioavailable). Tolvaptan hsa a plasma half-life of around 12 hours, a volume of distribution of 3L/kg, and has high plasma protein binding at 99%. Tolvaptan is extensively metabolised by 3A4, and therefore has many concommitent interactions with 3A4 substrates, inhibitors and inducers. Reportedly, Tolvaptan metabolites show no appreciable pharmacology against the vasopressin receptors. Interestingly, Tolvaptan is a racemic drug, with the two enantiomers showing differing PK/PD. Typical daily dosing is 30mg (or ~67µmol), or 60mg if insufficient efficacy is observed. The full prescribing information is here.

The structure (±)-4'-[(7-chloro-2,3,4,5-tetrahydro-5-hydroxy-1H-1-benzazepin-1-yl) carbony1]- o-tolu-m-toluidide. The molecule is rigid, with very few freely rotatable bonds, and comparatively planar (due to the presence of sp2 hybridized atoms adjacent to the core phenyl ring). The racemic stereocenter is at the hydroxyl on the benzazepine (a benzazepine is a seven-membered nitrogen containing heterocycle (an azepine) fused to benzene ring). The neutral, largely lipophilic and aromatic nature of Tolvaptan is consistent with the reported 3A4 avidity. Finally, another feature of note is the presence of an aniline in the molecule (an aniline is an aromatic amine, here in Tolvaptan it is masked as an amide); anilines have a reputation for being associated with unwanted toxicities with drugs, although this is by no-way a hard and fast rule! 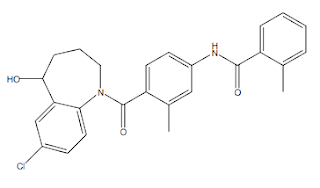 The license holder for Tolvaptan is Otsuka Pharmaceuticals and the product website is www.samsca.com