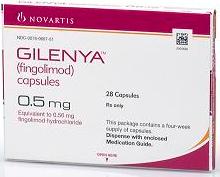 ATC code: L04AA27
On September 21st, the FDA approved Fingolimod (previously known as FTY-720) for the treatment of relapsing forms of multiple sclerosis (MS). Fingolimod is marketed under the name Gilenya and is the first oral drug that can slow the progression of MS.

MS is a chronic autoimmune disorder affecting the central nervous system (CNS) and causing a broad spectrum of neurological symptoms ranging from numbness of the limbs and muscle weakness to cognitive impairment, depression, and a broad spectrum of other disorders. People suffering from MS experience inflammatory reactions which damage the myelin sheath surrounding the axons of nerve cells. The inflicted lesions impair the transmission of action potentials and ultimately perturb normal function of the CNS.

Upon administration, Fingolimod is phosphorylated by sphingosine kinase (Uniprot: Q9NRA0) to form the the active metabolite Fingolimod-phosphate - Fingolimod is therefore a prodrug. Fingolimod-phosphate binds the sphingosine 1-phosphate receptors S1PR-1, S1PR3, S1PR4 and S1PR5 (Uniprot: P21453,  Q99500, O95977, Q9H228) with high affinity and thereby blocks the capacity of leukocytes to migrate from lymph nodes into the peripheral blood. These receptors are also known as EDG receptors, and are all members of the rhodospin-like GPCR family (PFAM: PF00001), the largest single historical successful family of drug targets (GPCR SARfari: S1PR-1 (aka. EDG1)). The curative mechanism underlying Fingolimod's therapeutic effect is unknown but may involve a reduced migration of lymphocytes into the CNS.

The chemical structure of Fingolimod was derived from the natural product Myriocin (a natural product, first isolated from the fungus Isaria sinclairii), which is known as an immune suppressor and inhibitor of the sphingosine biosynthesis. Myriocin is a structural analogue of sphingosine.

The peak concentration of Fingolimod in the blood is reached after 12 to 17 hours (TMAX) after oral administration and steady-state concentrations are reached after 1-2 months of daily oral administration, and are around ten-fold higher than from a single dose. Fingolimod is highly absorbed, having a bioavailability of 93%, and is also highly protein bound >99.7%, and has a high volume of distribution (Vd) of 1200L. The apparent half-life is 6 to 9 days, with a clearance of 6.3L.hr-1. Metabolisation of Fingolimod follows a main route of fatty acid-like degradation after oxidative biotransformation mainly by CYP4F2 (Uniprot: P78329).

Fingolimod is marketed under the name Gilenya by Novartis.