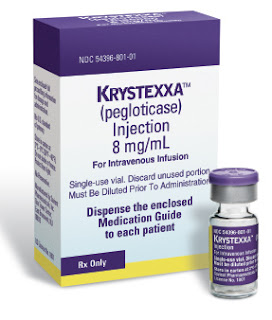 Gout is a painful affliction caused by microscopic needle-shaped crystals of sodium urate which precipitate in joints and tendons and stimulate a local inflammatory response. These attacks of inflammatory arthritis not only cause pain and stiffness of the joint, but, if left untreated for years, also damage the cartilage and surrounding tissue. Hard, non-painful deposits of crystalline uric acid known as tophi occur in the joints and sometimes the kidney.

Gout is generally associated with obesity, hypertension, insulin resistance and hyperlipidaemia. In more than half of the cases of diagnosed gout, patients have elevated blood levels of uric acid.

Conventionally, acute gout attacks are ameliorated by administration of non-steroidal anti-inflammatory drugs (NSAIDs) and the levels of uric acid are kept low by restricting diet, and also administration of inhibitors of xanthine oxidase (UniProt: P47989, ChEMBL: 149) such as allopurinol and febuxostat. Some patients however cannot tolerate conventional xanthine oxidase inhibitors because of severe allergic reactions. It is this group of patients that pegloticase has been approved for.

Pegloticase is a recombinant uricase, an enzyme that lowers the levels of puric acid by catalyzing the oxidation of puric acid to allantoin (see image), which in turn is readily eliminated via the kidneys. The uricase enzyme exists in all mammals but is not expressed in humans (Entrez Id of the pseudo-gene: 391051) and many primates. Therefore, pegloticase reduces uric acid levels through a catabolic function that has been relatively recently 'lost' in human evolution. 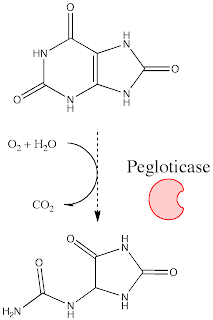 Pegloticase is a modified version of the mammalian uricase and is expressed in E.coli. Each uricase subunit is conjugated to monomethoxy-polyethylene-glycol (mPEG) and the enzyme occurs as a tetramer weighing ~540 kDa.

Eight milligram of Pegloticase are administered every two weeks as a parenteral infusion. In a single-dose, dose-ranging trial, Pegloticase reduced uric acid levels in a dose dependent manner and for doses of 8mg and 12mg, uric acid levels were kept below 6mg/dL for more than 300 hours (n=4).

The sequence of Peglocitase is very similar to that of pig uricase (UniProt:P16164)

Pegloticase must not be given to patients suffering from glucose-6-phosphate dehydrogenase (G6PDH) deficiency as there is a risk of hemolysis and methaemoglobinemia.

Krystexxa is marketed by Savient Pharmaceuticals Inc., the full prescribing information can be found here.