ATC Code: L01XX
Wikipedia: Carfilzomib
On July 20th 2012 the FDA approved Carfilzomib (KyorolisTM) for the treatment of patients with multiple myeloma who have received prior therapies including bortezomib and an immunomodulatory therapy, and who have demonstrated disease progression within 60 days of completion of the previous therapy. Multiple myeloma is a cancer of the Plasma Cells and usually in the bone marrow. Five year survival is about 40% in the UK and and the USA. 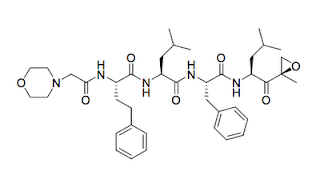 Carfilzomib is a second generation, non-competitive, irreversible proteasome inhibitor. It contains the unusual (for drugs) epoxide group responsible for the irreversible binding to the target. It is differentiated from the first generation proteasome inhibitor bortezomib (boron-based) in this irreversible inhibition mechanism, which is believed to contribute to overcoming bortezomib resistance. Additionally, clinical trials have showed that carfilzomib is associated with fewer incidences of Peripheral Neuropathy (NP) (incidence reported 14% of patients with 1% having Grade 3 NP) in comparison with bortezomib (36% and 24% Grade 3). Epoxides are quite reactive, and can react with many proteins in a biological system.


The molecular target for carfilzomib is the 20S catalytic core of the large multi-protein complex - the proteasome. Specifically, it binds to the N-terminal threonine-containing active site of the endopeptidase proteasome subunit beta type-7 (Uniprot: Q99436).

The amino acid sequence is:


Prescribing information had be found here.

The licence holder is Onyx Pharmaceuticals and the product website is www.kyprolis.com