On October 22nd 2012 the FDA approved Perampanel (research code: E2007, ER-155055-90, trade name Fycompa, CHEMBL1214124). Perampanel is an orally administered drug to be used as an adjunctive therapy for the treatment of partial-onset seizures with or without secondary generalized seizures in patients with epilepsy.

Epileptic seizures are defined as "abnormal excessive or synchronous neuronal activity in the brain". The net symptoms can be very diverse, from severe thrashing movements to a very mild brief loss of awareness. Approximately 4% of the population will have experienced a unprovoked seizure by the age of 80, with a 30-50% chance of repeat in this group. Seizures can last from a few seconds to a state of life threatening persistent seizure (known as status epilepticus).

Approximately 25 % of the people suffering from a seizure or  status epilepticus will be diagnosed to have epilepsy. Treatment may reduce the chance of a second seizure by as much as 50%.

Perampanel acts by non-competitively inhibiting the ionotropic α-amino-3-hydroxy-5-methyl-4- isoxazolepropionic acid (AMPA) glutamate receptor. This receptor consists of a heteromeric combination of 2 out of 4 known subunits GluR-1 - GluR4 (respectively: CHEMBL2009, CHEMBL4016, CHEMBL3595 and CHEMBL3190 or Uniprot 42261, 42262, 42263 and 48058). Of these, the combinations GluR-1/GluR-2 and GluR-2/GluR-3 are the most frequent. The specific mechanism by which Perampanel exerts its antiepileptic effect in humans has not been fully elucidated. 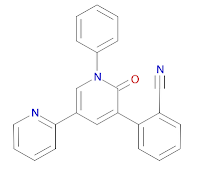 Perampanel is extensively metabolized via initial oxidation and sequential glucuronidation. Oxidative metabolism is mediated by CYP3A4 and/or CYP3A5 based on results of in vitro studies using recombinant human CYPs and human liver microsomes. Other CYP enzymes may also be involved.

The license holder is Eisai Inc. and the full prescribing information can be found here.