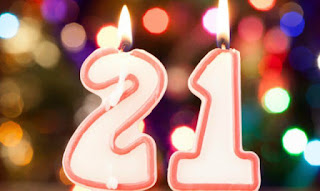 We are pleased to announce the release of ChEMBL_21. This version of the database was prepared on 1st February 2016 and contains:

Data can be downloaded from the ChEMBL ftpsite or viewed via the ChEMBL interface. Please see ChEMBL_21 release notes for full details of all changes in this release.

CHANGES SINCE THE LAST RELEASE

In addition to the regular updates to the Scientific Literature, PubChem, FDA Orange Book and USP Dictionary of USAN and INN Investigational Drug Names this release of ChEMBL also includes the following new data:

We have added >900 additional compounds in clinical development (phase I-III) to ChEMBL. These candidates mainly cover kinase, GPCR and nuclear hormone receptor targets. For each of these new candidates, we have curated likely efficacy targets (from a variety of sources such as scientific literature and pharmaceutical company pipeline documents) and added this information to the database. We have also updated the highest known development phase for compounds already in ChEMBL (such as monoclonal antibodies and compounds with USAN applications). We will continue to add further clinical candidate and target information in future releases (including targets for the existing monoclonal antibody candidates, and candidates for ion channel targets). Mechanism of action information for clinical candidates has been added to the 'Browse Drug Targets' tab on the ChEMBL interface, as well as the Compound and Target Report Cards: 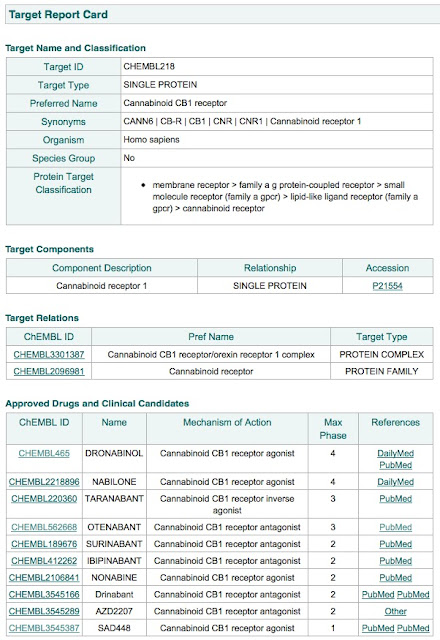 We have identified indications for FDA approved drugs from a number of sources including Prescribing Information, ClinicalTrials.gov and the WHO ATC classification and mapped these to both MeSH disease identifiers and Experimental Factor Ontology disease identifiers. We will add further indications for compounds in clinical development in future ChEMBL releases. Drug indications can be viewed on Compound Report Cards and also on the 'Browse Drug Indications' tab: 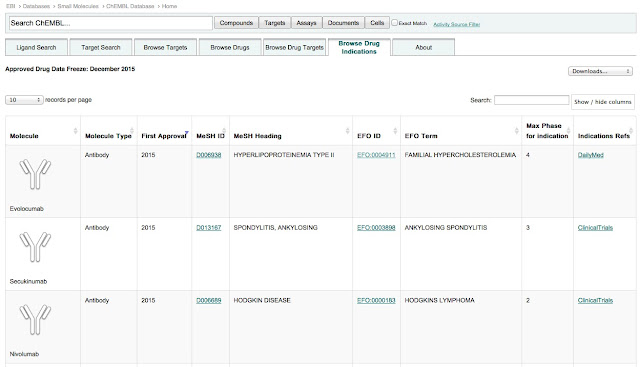 Experimental assay data from these sources can be viewed via the Compound and Assay Report Cards and Bioactivity Summary views as usual. Further interface enhancements will be included in the near future to allow browsing of drug metabolism pathway data.

We have created a Gene Ontology slim (GO slim) containing a subset of Gene Ontology terms that are well represented in protein targets from the ChEMBL database (see http://geneontology.org/page/go-slim-and-subset-guide and http://www.geneontology.org/ontology/subsets/goslim_chembl.obo). Targets can now be browsed by GO slim terms on the interface: 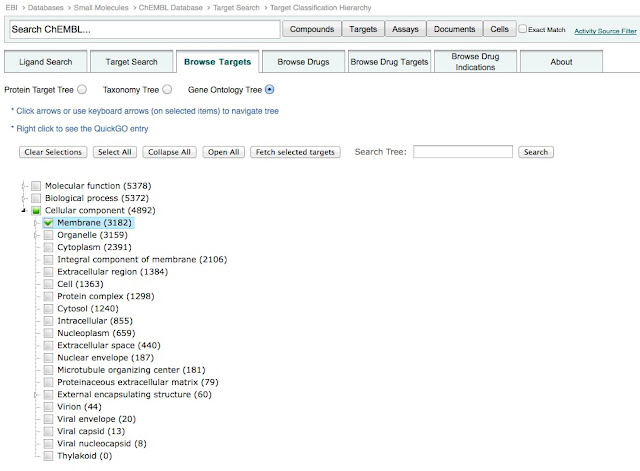 The organism classification has been enhanced for plant, insect and fungal targets to facilitate retrieval of crop protection data from the database.

ChEMBL 21 RDF files have been updated and can be downloaded from the ChEMBL-RDF ftpsite. The EBI-RDF Platform will be updated with the ChEMBL 21 RDF shortly.


We recommend you review the ChEMBL_21 release notes for a comprehensive overview of all updates and changes in ChEMBL 21, including schema changes, and as always, we greatly appreciate the reporting of any omissions or errors.

Keep an eye on the ChEMBL twitter and blog accounts for news and updates.