ChEMBL DB on SQLite, is that even possible? 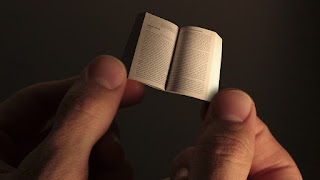 Short answer: Yes; Andrew Dalke did it in 2014 for ChEMBL 19 compounds but now it's officially supported by the ChEMBL team and covers the whole database.

One thing you can notice looking at the ChEMBL 21 FTP directory is a  new file called chembl_21_sqlite.tar.gz. What's that?

It's a binary SQLite database file containing all the ChEMBL 21 tables and data. If you don't know what the SQLite is, it's a very lightweight database system, that stores the entire database (definitions, tables, indices, and the data itself) as a single cross-platform file on a host machine. It's very popular as well, so if you have a Mac, Windows 10 or a Linux box, chances are that SQLite is already installed on your computer. Skype uses SQLite to store the local copy of conversation history and the Python language has SQLite bundled as a core library.


If it's so "lightweight", why is the SQLite ChEMBL 21 file 2.4GB, compared to less than 1.4GB for Oracle, MySQL and PostgreSQL dumps and is the largest file in the FTP directory? This is because the 'dumps' only contain raw data in a form of SQL statements, that yet have to be executed in order to create a database. In contrast, SQLite file IS a database already. This means that if you download a MySQL dump, for example, you need to install the MySQL server first. Most probably you will have to configure it as well. Once this is done, you install the MySQL client to create a new database and populate it with a data from the dump file. This can take several hours during which the engine will create tables and indexes. If you never done this before, the whole process can take you much longer and possibly you will need some help.


If you have SQLite installed you will see the prompt ready to execute your SQL statements:


SQLite standard terminal shell has many useful commands making is extremely convenient for simple tasks such as exports. We use SQLite CLI ourselves to prepare chembl_21_chemreps.txt.gz file, which is a text file containing structure information of all the ChEMBL compounds used by the UniChem software. In order to create it, we execute the following commands:


OK, but I hate terminal, can I have a GUI instead? Yes, just install sqlitebrowser and open the file as you would with any other program. You will see ChEMBL 21 tables, you can browse data and execute SQL statements with autocompletion. Of course you can also use SQLite in your Python (or IPython notebooks) scripts or KNIME workflows. 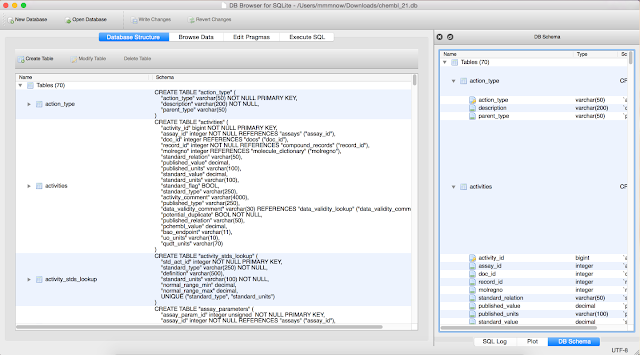 Isn't ChEMBL a bit too large for SQLite capabilities? Of course SQLite has its limitations. It's good for quick hacking and prototyping but as it doesn't implement client-server architecture it doesn't scale well. If all you need is the ability to run a SQL query locally on your laptop or extract some data, then probably SQLite would be your best choice. It's exceptionally fast on SSD hard drives. The chemreps file we've described above was generated on the Mid 2014 MacBook Pro with SSD and it took less than a minute to prepare. Just keep in mind, that SQLite always does a full table scan for


It does not keep meta information on tables to speed this process up so this operation will always be slower than on other engines.

How about chemistry logic? Riccardo Vianello created a project called ChemicaLite which is a cheminformatic SQLite database extension. It can generate and store fingerprints, compute descriptors, run chemical queries so everything you would expect from a normal chemical database.