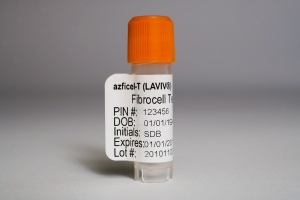 On June 21st 2011, the FDA approved azficel-T (trade name: laViv) for the aesthetic treatment of moderate to severe nasolabial fold wrinkles in adults ("smile lines"). laViv is an autologous cell therapeutic, consisting of fibroblasts (cells which can produce collagen) which are produced from a biopsy of post-auricular tissue by proliferation in vitro, and re-injected into the nasolabial folds to improve their cosmetic appearance. With increasing age, nasolabial folds can become more pronounced, caused by habitual facial expressions (i.e. laughing), and a decline of collagen production.

Alternative non-drug treatments include liposuction and facelift. After biopsy, dermal fibroblasts are expanded using standard tissue-culture procedures until a sufficient amount of cells for re-injection is obtained. This process takes 11-22 weeks. laViv is provided in two vials of approximately 18 million fibroblasts in 1.2 mL suspension and should be administered in three sessions at 3-6 weeks intervals by injection at 0.1 mL per linear centimeter of nasolabial fold wrinkle. The mechanism by which laViv works is not known.

In two clinical trials, the efficacy of azficel-T has been evaluated based on a five-point Subject Wrinkle Assessment scale, and additionally by physicians employing a six-point Evaulator Wrinkle Severity Assessment, and considered successful if a two-point improvement post- compared to pre-treatment was achieved. In both studies, the Subject Wrinkle Assessment for the group using laViv (57%/45%) was significantly improved as compared to the vehicle control group (30%/18%); equally, the Physician Wrinkle Assessment indicated an improvement of the condition using laViv (33%/19% as compared to 7% for both control groups). To avoid immune reactions, the identity of donor and recipient has to be assured.

Common adverse reations are injection-site reactions such as redness, bruising, swelling, and pain. Pediatric safety and efficacy have not been established; clinical studies lack sufficient number of subjects in geriatric or non-White population. Efficacy of the product beyond six months has not been established. laViv has been developed by Fibrocell Technologies.