On November 13, 2013, the FDA approved Ibrutinib (ImbruvicaTM) for the treatment of patients with mantle cell lymphoma (MCL) who have received at least one prior therapy. MCL is a subtype of B-cell lymphoma and accounts for 6% of non-Hodgkin's lymphoma cases. In an open-label, multi-center, single-arm trial of 111 previously treated patients, Ibrutinib showed a 65.8% response rate. 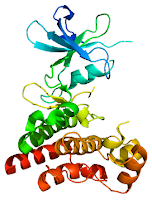 Ibrutinib is an irreversible inhibitor of the Tyrosine-protein kinase BTK (Uniprot:Q06187; ChEMBL:CHEMBL5251; canSAR target synopsis) and is the first approved targeted BTK inhibitor. It forms a covalent bond with a cysteine residue via a Michael acceptor mechanism, in the BTK active site, leading to inhibition of BTK enzymatic activity 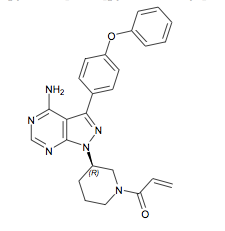 ImbruvicaTM is produced by Pharmacyclics, Inc.

The full Prescribing Information is here