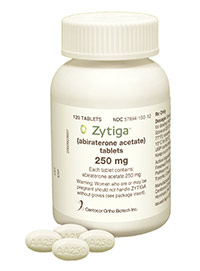 On 28th April 2011, the FDA approved Abiraterone acetate (Brand name ZytigaTM, NDA 202379) for the treatment of castrate-resistant prostate cancer (CRPC). Specifically, it is indicated for use in combination with prednisone for the treatment of patients with metastatic CRPC who have received prior chemotherapy containing docetaxel. Response biomarkers are amplified Androgen Receptor (AR); PTEN loss and hormone driven ERG rearrangement.

Abiraterone irreversibly inhibits 17-α-hydroxylase/C17,20-lyase (CYP17A1), an androgen biosynthesis enzyme expressed in testicular, adrenal, and prostatic tumor tissue. (Uniprot:P05093, canSAR link) and a member of the cytochrome P450 family of enzymes (PFAM:P450). Cyp17A1 normally catalyses a two step reaction: the conversion of pregnenolone and progesterone to their 17α-hydroxy- derivatives and then the formation of dehydroepiandrosterone (DHEA) and androstenedione, the precursors of testosterone. No structure of CYP17A1 itself exists, but it is homologous to other Cytochrome p450 enzymes such as CYP1A2 (PDBe:2hi4). 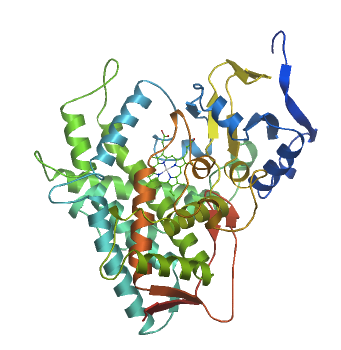 Abiraterone's safety and effectiveness were established in a clinical study of 1,195 patients with late-stage castration-resistant prostate cancer who had received prior treatment with docetaxel chemotherapy, and showed improved survival. Zytiga is supplied in 250 mg tablets and the recommended dose is 1000 mg administered orally once daily in combination with prednisone 5 mg administered orally twice daily.

The prescribing information can be found here.

Abiraterone was discovered at the Institute of Cancer Research and, through a series of licensing and aquisitions is now manufactered and marketed by Entocor Ortho Biotech Inc, part of Johnson and Johnson.