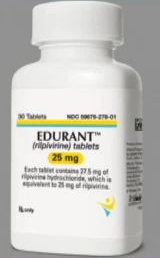 On May 20th, the FDA approved Rilpivirine (Tradename: Edurant; Research Code: TMC-278, NDA 202022), an HIV-1 Non-nucleoside reverse transcriptase inhibitor (NNRTI), for the treatment of HIV infection in treatment naive patients in combination with other HIV therapies. HIV infection is a serious, and if untreated fatal infection caused by a lentivirus, however due to intensive research, leading to a wide variety of antiviral agents the disease is treatable with a substantial increase in quality of life anticipatable.

Rilpivirine is an inhibitor of the essential reverse transcriptase (RT) enzyme of HIV-1. (ChEMBLID:CHEMBL247; Uniprot ID:Q72547), a viral protein required for the transcription of the single-stranded RNA genome of HIV-1 into double-stranded DNA - this is the opposite of the classical transcription of DNA into RNA. The RT enzyme is translated as part of a long complex gag-pol polyprotein, and requires specific proteolytic cleavage by a virally encoded protease (HIV-1 PR) - this protease is also the target of many successful HIV therapies. There are two distinct binding sites within the RT enzyme that are therapeutically targetable - first is the catalytic center for drugs such as AZT and other nucleoside analogues, the second is the 'allosteric' non-nucleoside site, which is only usefully present in the HIV-1 RT sequence, and so NNRTI agents are usually specific for HIV-1. Rilpivirine is a non-competitive inhibitor of HIV-1 RT.

There are many protein structures known for RT in complex with inhibitors, including that of the complex with TMC-278/rilpivirine itself - PDBe:3mee. The RT enzyme has an interesting composition, being a heterodimer of two proteins derived from the same gag-pol polyprotein - one called p66, the other p51, both contain the polymerase functionality (the polymerase domain is composed of four structural subunits, within each polymerase unit, these domains are arranged differently forming an asymmetric dimer), the p66 additionally contains a further catalytic function - Ribonuclease H. 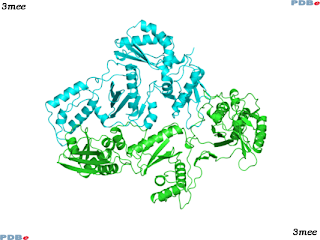 There are a number of other approved NNRTIs, and a large number in either current or stalled clinical development. Approved drugs include the USANs Efivarenz, Nevirapine, Delaviridine & Etravirine. 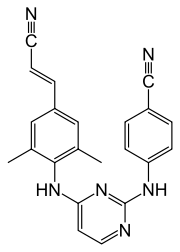 Rilpivirine is available as oral tablets contains 27.5 mg of Rilpivirine hydrochloride (equivalent to 25 mg of active ingredient). Rilpivirine should be administered with food, since in fasted patients, absorption is significantly lower. Human plasma protein binding (ppb) primarily to serum albumin is approximately 99.7%. The primary metabolising route of Rilpivirine is through oxidative metabolism by CYP3A4, with a half-life of ca. 50 hr, with elimination being largely via feces.

The license holder for Rilpivirine is Johnson & Johnson., and the full prescribing information can be found here.