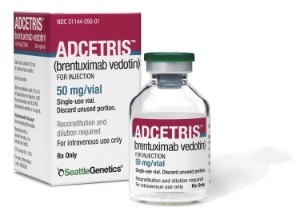 ATC code:L01XC12
On 19th August 2011, the FDA approved Brentuximab vedotin (trade name AdcetrisTM, ATC code:L01XC12, research code:SGN-35, aAC10-vcMMAE), a antibody drug conjugate (ADC) targeting CD-30, indicated for the treatment of patients with Hodgkin's lymphoma after failure of autologous stem cell transplant (ASCT) or after failure of at least two prior multi-agent chemotherapy regimens in patients who are not ASCT candidates (1.1); and the treatment of patients with systemic anapaestic large-cell lymphoma after failure of at least one prior multi-agent chemotherapy regimen.

Hodgkin's lymphoma is a cancer of cells derived from white blood cells called lymphocytes. In Hodgkin's lymphoma, the disease spreads from one lymph node group to another, and then leads to more systemic effects. Hodgkin's lymphoma can be treated with radiation therapy, chemotherapy or autologous hematopoietic stem cell transplantation. The occurrence of the disease shows two age peaks: the first in young adulthood (age 15–35) and the second in those over 55 years old
Brentuximab vedotin's molecular (for the antibody component of the ADC, Brentuximab) target is CD30 (Uniprot: P28908; canSAR ; PFAM: PF00020), which is expressed on activated T- and B-cells, and also is an established tumour marker. Endogenous CD30 ligands include TRAF1, TRAF2, TRAF3 and TRAF5. CD30 is a transmembrane protein, 577 amino acid long, containing three related copies of the TNFR_c6 domain (PFAM:PF00020). The structure of TRAF2 complexed to part of CD30 is known (see PDBe:1d01) 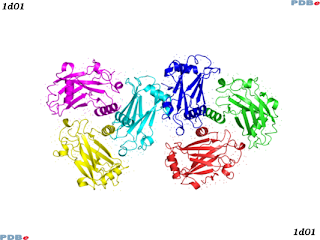 The antibody component Brentuximab binds to CD30 expressing cells, the the complex is then internalised, and the cytotoxic agent Monomethyl auristatin E (MMAE) which blocks cell division by preventing tubulin polymerisation. Auristatin is a marine natural product peptide derivative. There are approximately 4 copies of MMAE coupled to each antibody, and MMAE is linked through a protease activatable linker. The total molecular weight of Brentuximab vedotin is ca. 153 kDa. Brentuximab can therefore be considered to have two targets (CD30 and tubulin), and also to be a prodrug.

Brentuxumab vedotin is the second US approved antibody drug conjugate - the first being gemtuzumab ozagamicin (Mylotarg) which was approved in 2001, but subsequently withdrawn from the market. A significant number of ADCs are currently in clinical development.

Brentuximab is a human antibody. The antibody portion of Brentuximab vedotin has the sequence of two copies of:


The linker-MMAE has the following structure:

Brentuximab is administered intravenously, and the recommended dose is 1.8 mg/kg administered over 30 minutes every 3 weeks for a maximum of sixteen cycles doses. The terminal half-life (t1/2) is 4 to 6 days.

The full US prescribing information for Brentuximab vedotin can be found here. Adcetris™ is a product of Seattle Genetics