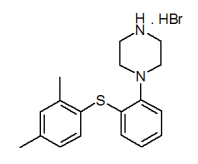 The recommended starting dose of Vortioxetine is 10 mg administrated orally once daily. The dose should then be increased to 20 mg/day, as tolerated. For patients who do not tolerate higher doses, a dose of 5 mg/day should be considered. Vortioxetine is 75% orally bioavailable, with an apparent volume of distribution of 2600L, a plasma protein binding of 98% and a terminal half-life of ca. 66 hours. Vortioxetine is extensively metabolised primarily through oxidation via cytrochrome P450 enzymes CYP2D6, CYP3A4/5, CYP2C19, CYP2C9, CYP2A6, CYP2C8 and CYP2B6 and subsequent glucuronic acid conjugation. CYP2D6 is the primary enzyme catalysing Vortioxetine to its major, pharmacologically inactive, carboxylic acid metabolite. Poor metabolisers of CYP2D6 have approximately twice the Vortioxetine plasma concentration of extensive metabolisers and therefore the maximum recommended dose in known CYP2D6 poor metabolisers is 10 mg/day. Vortioxetine is excreted in the urine (59%) and feces (26%) as metabolites, with a negligible amount of unchanged compound being excreted in the urine up to 48 hours.

The licensed holder of Vortioxetine is H. Lundbeck A/S and the full prescribing information can be found here.