On October 13th the FDA approved Macitentan (trade name Opsumit ®) for the treatment of pulmonary arterial hypertension (PAH). Macitentan is an endothelin receptor antagonist (with affinities to both Endothelin ET-A (ETA) and Endothelin ET-B (ETB) receptor subtypes, similar in mechanism of action to the previously licensed drug Bosentan, CHEMBLID957).

Macitentan acts as an antagonist for both receptors with both a high affinity and long residence time in human pulmonary arterial smooth muscle cells. Hence it counteracts vasoconstriction and relieves hypertension. One of the metabolites of Macitentan is also pharmacologically active at the ET receptors and is estimated to be about 20% as potent as the parent drug in vitro 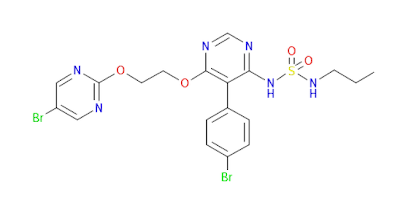 Metabolism and Elimination
Following oral administration, the apparent elimination half-lives of macitentan and its active metabolite are approximately 16 hours and 48 hours, respectively. Macitentan is metabolized primarily by oxidative depropylation of the sulfamide to form the pharmacologically active metabolite. This reaction is dependent on the cytochrome P450 (CYP) system, mainly CYP3A4 with a minor contribution of CYP2C19. It is interesting to note the presence of bromine atoms in two of the aryl rings, typically a lighter halogen, typically fluorine is used to block oxidative P450-mediated metabolism at these exposed aromatic positions.

At steady state in PAH patients, the systemic exposure to the active metabolite is 3-times the exposure to macitentan and is expected to contribute approximately 40% of the total pharmacologic activity. In a study in healthy subjects with radiolabeled macitentan, approximately 50% of radioactive drug material was eliminated in urine but none was in the form of unchanged drug or the active metabolite. About 24% of the radioactive drug material was recovered from feces.

Pregnancy
Macitentan may cause fetal harm when administered to a pregnant woman. Macitentan is contraindicated in females who are pregnant.

Hepatotoxicity
Other ERAs have caused elevations of aminotransferases, hepatotoxicity, and liver failure. Obtain liver enzyme tests prior to initiation of Macitentan and repeat during treatment as clinically indicated.

Hemoglobin Decrease
Decreases in hemoglobin concentration and hematocrit have occurred following administration
of other ERAs and were observed in clinical studies with Macitentan. These decreases occurred
early and stabilized thereafter Initiation of Macitentan is not recommended in patients with severe anemia. Measure hemoglobin prior to initiation of treatment and repeat during treatment as clinically indicated.

The license holder is Actelion Pharmaceuticals US the full prescribing information can be found here.