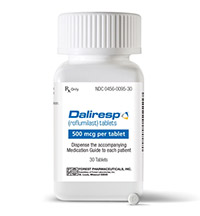 On February 28th, 2011, the FDA approved Roflumilast (tradename:Daxas tradename:Daliresp NDA 022522) for the treatment of patients with chronic obstructive pulmonary disease (COPD) a chronic and serious disease involving restriction of full lung function. The narrowing of airways of COPD is irreversible, and follows inflammation in the lung, believed to be linked to environmental pollutants such as tobacco smoke, workplace dusts and urban air pollution. This inflammation causes structural damage to the delicate alveoli structures.

Roflumilast and an active metabolite, Roflumilast-N-Oxide, are selective Phosphodiesterase 4 inhibitors. The subfamily of Type 4 Phospodiesterases comprises four distinct members, PDE4A, -4B, -4C, and -4D (Uniprot:P27815, Q07343, Q08493, Q08499, respectively, all are very closely related enzymes containing a characteristic cyclic nucleotide diesterase catalytic domain Pfam:PF00233). These in turn occur in different splicing isoforms with tissue specific expression, many of them in the lung. Phosphodiesterase 4 catalyzes a reaction transforming cyclic 3'-5'-adenosine monophosphate (cAMP, ChEBI: 17489) into adenosine 5'-monophosphate (AMP). Roflumilast has an IC50 against PDE-4 of ca. 2nM, affinities against the PDE4A, PDE4B, and PDE4D isozymes are all similar, whereas affinity against the PDE4C isozyme is ca. 5 fold lower. The exact mechanism by which Roflumilast reduces the risk of COPD exacerbations is not known, but it is believed that an increase in cAMP levels in lung cells attenuates the abnormal inflammation process associated with COPD. In clinical trials, it was observed that the numbers of specific types of immune cells - eosinophils and neutophils - were reduced by 31% and 42% after 4 weeks of treatment with Roflumilast. 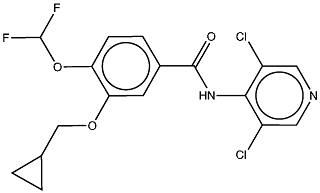 The structure of a number of phosphodiesterase enzymes are known, including a number of PDE4 isoforms, a typical complex of PDE4D with an inhibitor is PDBe:1y2k 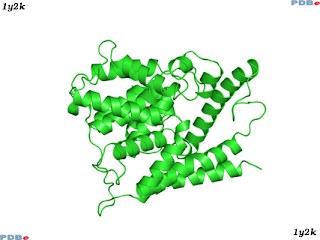 Roflumilast's oral bioavailability (at the recommended dose of 500 ug) is approximately 80% and the volume of distribution (Vd) is about 2.9 L.kg-1 and a clearance (CL) of 9.6 L.hr-1. Roflumilast is transformed into an active metabolite, Roflumilast-N-oxide via a metabolic route involving cytochromes CYP1A2 (Uniprot: P05177) and CYP3A4 (Uniprot: P08684). It is the only metabolite observed in humans at relevant plasma concentrations. In-vitro inhibition of Phosphodiesterase 4 by the active metabolite is three times less potent compared to the parent compound. However, its plasma AUC is about 10-fold greater than the plasma AUC of Roflumilast.  Maximum plasma concentrations CMAX of Roflumilast and Roflumilast-N-oxide are reached after 1 hour and eight hours, respectively.  Plasma protein binding (ppb) of the dosed drug and the active metabolite is 99% and 97% respectively. Roflumilast is eliminated primarily through the urine and the drug's half life after oral administration is 17 hours and 30 hours for Roflumilast-N-oxide.

Roflumilast is administered once daily as an oral tablet containing 500 ug of active ingredient (equivalent to 1.2 umol).

Roflumilast was approved by the European commission in 2010 and is marketed in Europe as Daxas. In the US, Roflumilast will be marketed by Forest Pharmaceuticals under the trade name Daliresp (product website).