The most recent FDA drug approval is Azilsartan Medoxomil, approved on February 25th (NDA 200796). Azilsartan Medoxomil (research code: TAK-491; tradename: Edarbi) is an angiotensin II receptor blocker prodrug indicated for the treatment of hypertension, either alone or in combination with other antihypertensive agents. Hypertension is a medical condition in which the blood pressure in the vessels is too high, and can lead to kidney failure, stroke, myocardial infarction (heart attack), aneurysm, and many other pathologies. The renin-angiotensin system is a key regulator of blood pressure; Angiotensin is an hormone system that regulates the blood pressure and the fluid balance. The short peptide Angiotensin II is the principal agent of this system, and is responsible for vasoconstriction, stimulation of synthesis and release of aldosterone, cardiac stimulation, and renal reabsorption of sodium.

Azilsartan (ChEMBL: ChEMBL57242; PubChem: CID9825285; Chemspider: 8001032), the bioactive ingredient of the prodrug Azilsartan Medoxomil, is a selective AT1 subtype angiotensin II receptor (ChEMBL: ChEMBL227; Uniprot: P30556) antagonist and exerts its therapeutic effects by selectively blocking the binding of angiotensin II to the AT1 receptor in tissues, such as vascular smooth muscle and the adrenal gland. Angiotensin receptors are a class of G protein-coupled receptors (GPCR) that belong specifically to the family of rhodopsin-like receptors and in which the drug binding occurs at a well defined site within the ligand-binding domain (PFAM: PF00001). A second angiotensin receptor is also known - AT2 angiotensin II receptor (ChEMBL: CHEMBL4607; Uniprot: P50052) which is broadly expressed and suggested to mediate effects such as inhibition of cell growth, fetal tissue development, modulation of extracellular matrix, neuronal regeneration, apoptosis, cellular differentiation. AT2 angiotensin II receptor is not known to be associated with cardiovascular homeostasis and, moreover, Azilsartan has more than 10k-fold greater affinity for the AT1 receptor (with an IC50 of 2.6 nM for human AT1 receptor) than for the AT2 receptor. Also, Azilsartan does not significantly bind or block other receptors or ion-channels known to be involved in cardiovascular regulation. 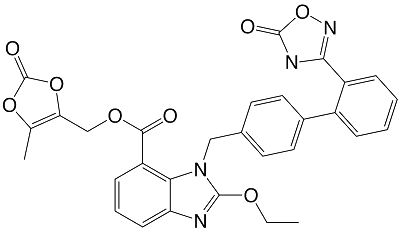 Azilsartan Medoxomil (IUPAC: (5-methyl-2-oxo-1,3-dioxol-4-yl)methyl-2-ethoxy-3-[[4-[2-(5-oxo-1-oxa-2-aza-4-azanidacyclopent-2-en-3-yl)phenyl]phenyl]methyl]benzimidazole-4-carboxylate; SMILES: O=C(C1=C2C(N=C(OCC)N2CC3=CC=C(C4=CC=CC=C4C(N5)=NOC5=O)C=C3)=CC=C1)OCC6=C(C)OC(O6)=O ) has a molecular weight of 568.53 Da (606.62 Da for the potassium salt), has 1 hydrogen bond donor, 10 hydrogen bond acceptors, an AlogP of 5.3, a polar surface area of 139.6 Å2 and 10 rotatable bonds, which makes the molecule very flexible. Azilsaratan Medoximil does not contain any chiral centers, and as the active drug azilsartan, the physicochemistry will be dominated by the negatively charged carboxylic acid. Azilsartan medoximil is a synthetic small molecule drug.

Azilsartan Medoxomil has a black box warning - and should not be used in pregnancy.

The license holder is Takeda Pharmaceuticals America, Inc. and the product website is www.edarbi.com.

Unknown said…
The ChemSpider record for Azilsartan Medoxomil can be found here:
http://www.chemspider.com/Chemical-Structure.25069044.html
2 March 2011 at 13:27

Unknown said…
Someone pointed out to me that the previous link that I supplied to ChemSpider was incorrect - the correct record is:

I would also point out that the SMILES string mentioned in the article actually corresponds to the incorrect structure.