On March 14th 2011, the FDA approved Gadobutrol (USAN: Gadobutrol USANdate: 2010 tradename: Gadavist NDA 201277), a gadolinium-based contrast agent, for intravenous (i.v.) use in diagnostic MRI to detect and visualize areas with disrupted blood brain barrier and/or abnormal blood supply of the central nervous system. In MRI, when an electromagnetic field is applied, the hydrogen nuclei present in the body, flip their spin and align with the direction of the field. Once the field is turned off, the hydrogen nuclei decay to the original spin-down state and release a photon, corresponding to the energy difference between the two states. Since, hydrogen nuclei in different tissues return to their equilibrium state at different rates, a distinctive image can be obtained. Gadobutrol enhances the contrast in MIR images, by decreasing the spin-lattice relaxation time (T1) and the spin-spin relaxation time (T2). 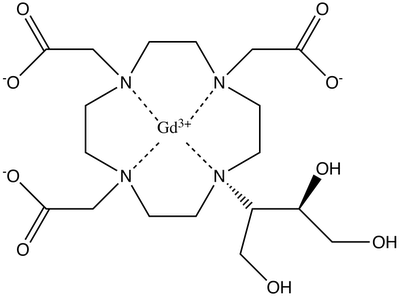 In comparison with the other gadolinium chelates, gadobutrol has a macrocyclic framework and is overall neutral in charge.

Gadobutrol is dosed intravenously, with a recommended dose of 0.1 mL/kg body weight (0.1 mmol/kg). It is more concentrated than other gadolinium-based contrast agents and should be administered at half of the volume. Gadoburtol is cleared from the plasma, after an intravenous injection (iv) with a mean terminal half-life (t1/2)of 1.81 hr. It is excreted in an unchanged form via the kidneys.

Gadavist has a black box warning and should not be used in patients with impaired elimination of drugs. It may increase the risk of nephrogenic systemic fibrosis (NSF).

The license holder for Gadavist is Bayer HealthCare Pharmaceuticals, the product website is here, and the full prescribing information can be found here (Gadobutrol was approved in the EU in 2000 under the tradename Gadovist, the European SPC can be found here).