On March 9th, 2011, the FDA approved Belimumab (trade name: Benlysta, ATC code L04AA26), an immunosuppressant human monoclonal antibody, for treatment of patients with systemic lupus erythematosus (SLE, OMIM:152700, ICD-10:M32.), a systemic autoimmune disease. The prevalence of SLE varies among differing ethnic groups, and countries, e.g. 40 per 100,000 in Northern Europe, 53 in 100,000 in the US, and 159 in 100,000 among people of Afro-Caribbean descent; this translates to about 159,000 cases in the US, among 1.5 million cases of different forms of lupus in general. In SLE, periods of illness alternate with remissions, and symptoms are diverse, comprising fever, malaise, joint pains, myalgias, and fatigue, but also dermatological symptoms (e.g. malar rash), anemia, cardiac, pulmonary and renal impairments as well as neurological and neuropsychiatric syndromes such as headache and depression, rendering diagnosis challenging. SLE is currently incurable, and its symptomes are traditionally treated with powerful agents such as cyclophosphamide, corticosteroids and immunosuppressants.

Belimumab acts by binding to the soluble form of B-lymphocyte stimulator (BLyS, a.k.a. BAFF, TNFSF13B, CD257, Uniprot:Q9Y275 Pfam:PF00229), a member of the TNF superfamily of proteins. BLyS promotes the survival and development of B-lymphocytes into mature plasma B cells; these key immune system cells produce antibodies, mediating the humoral immune response. BLyS was discovered for its immune stimulant properties in 1999 by Human Genome Sciences (HGS), who jointly with GSK then developed Belimumab as an effective BLyS inhibitor, and ultimately the first new lupus drug since 1955.

As the name Belimumab implies, it is a human (-u-) immunomodulatory (-lim-) antibody.

The structure of the soluble form of BLyS is known, a typical pdb entry is 1kxg. 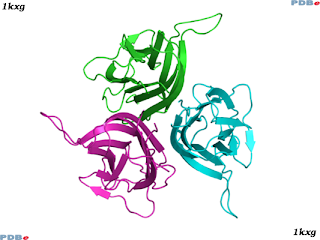 After reconstitution of lyophilized powder, Benlysta is diluted to the recommended dosage of 10 mg/kg and injected intravenous at 2-week intervals for the first 3 doses, and at 4-week intervals thereafter. The distribution half-life (t1/2) of Belimumab is 1.75 days, the terminal half-life (t1/2) is 19.4 days, with a steady state Volume of distribution (VSS) of 5.29 L, and a Clearance (Cl) of 215 mL.day-1.

The full prescribing information can be found here, and the product website is here.