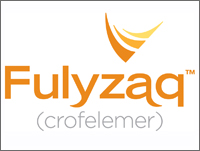 On December 31 2012, the FDA approved Crofelemer for the treatment of diarrhea caused by antiretroviral medication regimens taken by patients with HIV/AIDS.

Crofelemer alleviates the symptoms of HIV-associated diarrhea by limiting the amount of chloride ions that are pumped into the intestinal lumen, thus also retaining sodium ions and water. Crofelemer is a natural product oligomer that is not orally bioavailable but acts locally on the intestinal surface. It was shown to inhibit two distinct intestinal chloride channels expressed in the luminal membrane of gut epithelial cells. One of them, the cystic fibrosis transmembrane conductance regulator (CFTR, Uniprot: P13569, CHEMBL4051) is a member of the ABS transporter family, the other is a calcium-activated chloride channel (CaCC) and is called Anoctamin-1 (TMEM16A, Uniprot: Q5XXA6). Anoctamin-1 is currently the only known CaCC expressed at the luminal membrane of gut epithelial cells but crofelemer might also inhibit other CaCCs. 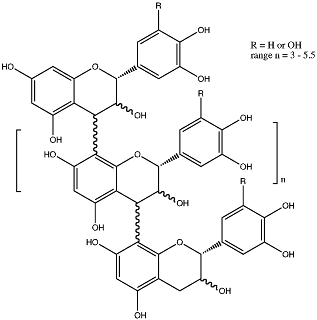 Crofelemer is extracted from the red latex of the South American tree Croton lechleri and is an amorphous red-brown powder. The oligomer is a random sequence of (+)-catechin, (-)-epicatechin, (+)gallocatechin and (-)-epigallocatechin monomers (on average 5 to7.5) and average mass of 1500Da to 2300Da.

Crofelemer is dosed twice-daily in delayed release tablets containing 125mg of the active ingredient. It is practically not absorbed into the blood and typical pharmacokinetic parameters are thus not applicable.

The commercial name for crofelemer is Fulyzaq.

Unknown said…
please revise the labels,
you,ve stated it's taken orally but the label says it's taken topically!!
12 April 2014 at 20:03

This is a complicated one - the drug is dosed orally, but is not absorbed through the gut, and therefore acts topically (on the lining of the gut). The basic feature we are trying to capture here is whether the drug is absorbed after oral dosing achieving therapeutic effect through systemic exposure. However, like another recent drug asenapine, it is a specific complicated case.
16 April 2014 at 08:09